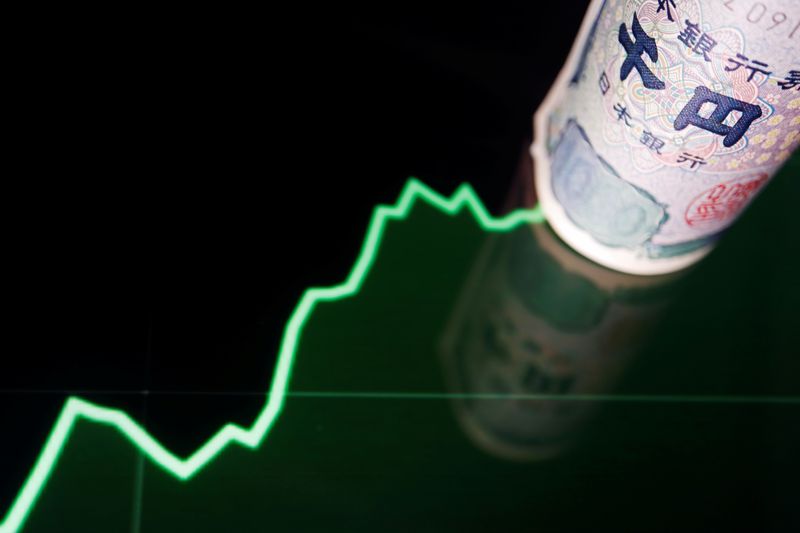 By Kantaro Komiya and Leika Kihara

TOKYO (Reuters) -The Bank of Japan conducted a rate check on Wednesday in apparent preparation for currency intervention, a market source told Reuters, as policymakers stepped up warnings against the currency's recent rapid falls.

News of the rate check, reported earlier by the Nikkei newspaper, pushed the yen up to 143.53 per dollar, off a 24-year trough near 145 per dollar hit last week.

The move underscores growing concern among policymakers over the currency's sharp pace of decline, which not only hurts consumption by inflating the cost of imported raw material but heightens uncertainty for firms in making business decisions.

"Recent moves are rapid and one-sided, and we're very concerned. If such moves continue, we must respond without ruling out any options," Finance Minister Shunichi Suzuki told reporters, before the Nikkei reported on the rate check.

"We're talking about taking all available options, so it's correct to think so," Suzuki said, when asked whether yen-buying currency intervention was among the government's options.

The remark was the strongest to date by government officials in signalling the possibility of intervention, which markets consider highly unlikely due to the difficulty Tokyo would face in getting agreement from its G7 partners.

The currency has depreciated nearly 30% this year, as the Bank of Japan (BOJ) has kept policy super-loose while many of its global peers, such as the U.S. Federal Reserve, have aggressively raised interest rates to combat surging inflation, making Japanese assets less attractive to investors.

Aside from verbal warnings, Japanese policymakers have several options to stem excessive yen falls. Among them is a rare direct intervention in the currency market, selling dollars and buying up large amounts of yen.

A rate check by the BOJ, a practice in which central bank officials call up dealers and ask for the price of buying or selling yen, is seen in currency markets as a possible precursor to action.

When the BOJ made its check, the rate was around 144.9 to the dollar, Jiji news agency said, citing a market source. The 145 mark is seen as a key level for market watchers.

Many traders remained doubtful that intervention was imminent, but the jump in the yen pointed to rising nerves. The timing of the BOJ's move also suggests that 145 per dollar will be an important level for markets and the authorities.

"My feeling is that the Ministry of Finance won't intervene at this stage and will leave it at verbal warnings," said Takeshi Minami, chief economist at Norinchukin Research Institute in Tokyo.

"There's still a week before the Fed's rate-setting meeting. I don't think markets believe the ministry will intervene at current dollar/yen levels."

When asked about reports of the rate check, Chief Cabinet Secretary Hirokazu Matsuno told a briefing on Wednesday the government was watching markets carefully and would coordinate closely with the BOJ.

News of a rate check may heighten market attention on what the BOJ could decide at its Sept. 21-22 policy meeting, which will follow the Fed's rate-setting meeting on Sept. 20-21.

Sources familiar with its thinking have told Reuters earlier the BOJ has no intention of raising interest rates or tweaking its dovish policy guidance to prop up the yen.

While the BOJ is widely expected to keep interest rates ultra-low, it may issue a warning against the yen's sharp move after its meeting, either in its regular policy statement or in Governor Haruhiko Kuroda's briefing, analysts say.

Once welcomed for giving exports a boost, the yen's weakness is becoming a cause for headaches for Japanese policymakers, because it hurts households and retailers by inflating the already rising prices of imported fuel and food.

Yen-buying intervention has been very rare. The last time Japan intervened to support its currency was in 1998, when the Asian financial crisis triggered a yen sell-off and a rapid capital outflow from the region. Before that, Tokyo intervened to counter yen falls in 1991-1992.