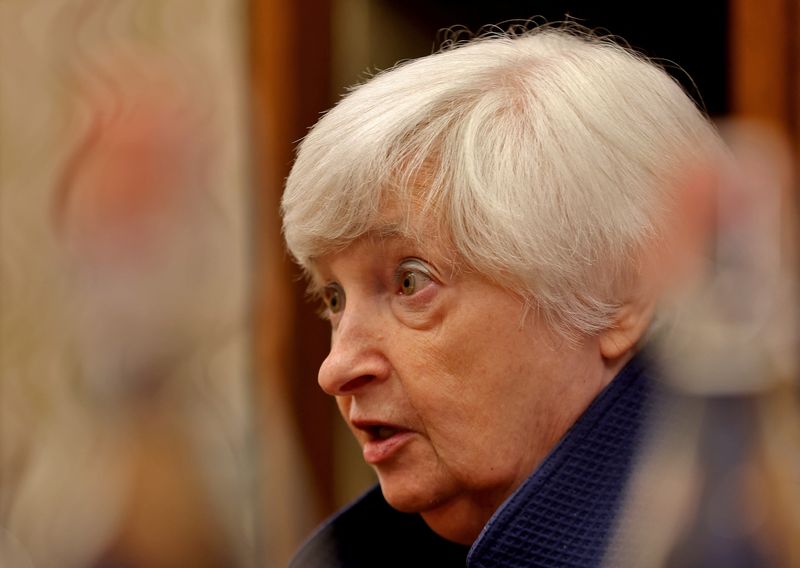 By Kanishka Singh and David Lawder

"Once the limit is reached, Treasury will need to start taking certain extraordinary measures to prevent the United States from defaulting on its obligations," Yellen said in a letter to congressional leaders in which she urged lawmakers to act quickly to raise the debt ceiling.

As of Wednesday, Treasury data showed that U.S. federal debt stood $78 billion below the limit, with a Treasury operating cash balance of $346.4 billion. The department on Thursday reported an $85 billion December deficit as revenues eased and outlays grew, particularly for debt interest costs.

Yellen said in her letter to new Republican House Speaker Kevin McCarthy that the Treasury this month anticipates suspending new investments in two government retiree funds for pensions and healthcare, as well as suspending reinvestments in the Government Securities Investment Fund, or G Fund, part of a savings plan for government employees.

"The use of extraordinary measures enables the government to meet its obligations for only a limited amount of time," Yellen wrote to McCarthy and other congressional leaders.

"It is therefore critical that Congress act in a timely manner to increase or suspend the debt limit. Failure to meet the government’s obligations would cause irreparable harm to the U.S. economy, the livelihoods of all Americans, and global financial stability," Yellen wrote.

Republicans, now with a slim new majority in the House of Representatives, are keen to demand spending reductions from the Biden administration, raising concerns about a bruising fight over the debt ceiling, which Republicans have threatened to use as leverage.