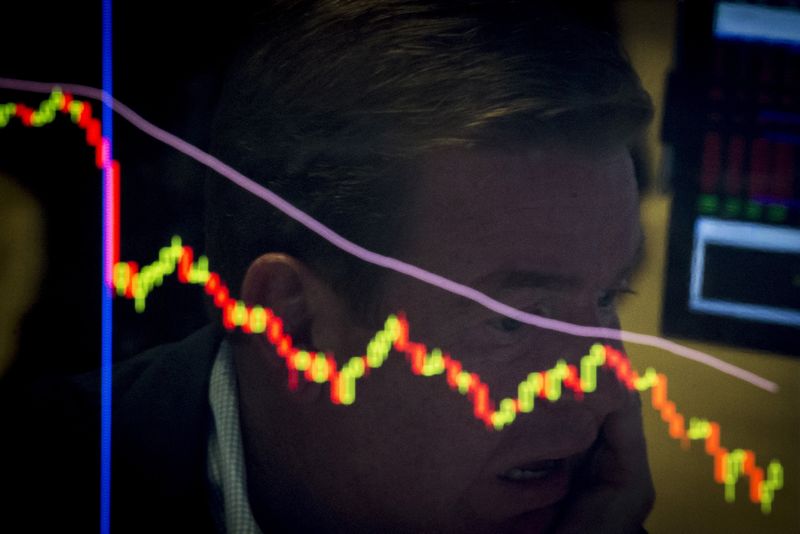 © Reuters. FILE PHOTO: A specialist trader is reflected in a screen at his post on the floor of the New York Stock Exchange, August 21, 2015. REUTERS/Brendan McDermid/File Photo

NEW YORK (Reuters) - The benchmark S&P 500 was down more than 20% from its Jan. 3 record closing high in early trading Monday as investors sold stocks amid worries over whether the Federal Reserve will be able to tame inflation without triggering a recession.

A close of more than 20% below the record high would confirm the index was in a bear market, according to a commonly used definition. It would be the first time the S&P 500 has confirmed a bear market since the 2020 Wall Street plunge brought on by the COVID-19 pandemic.

Stocks have been volatile since the start of the year, with Russia's invasion of Ukraine in late February also taking a heavy toll on markets.

But increasing worries about inflation and the U.S. central bank's monetary policy tightening as it attempts to quell it have fueled much of the recent sell-off.

On Friday, major U.S. stock indexes posted their biggest weekly percentage declines since January and ended sharply lower on the day after a report showed steeper-than-expected rise in U.S. consumer prices in May.

"Consumer sentiment in the U.S. hit an all-time low in May due largely to higher prices and growing concerns inflation is here to stay," Morgan Stanley (NYSE:MS) equity strategist Michael Wilson wrote in a note Monday.

With a break below the year's low and a move below 3,850, "we see potential downside in the S&P 500 to a little over 3,200," Lori Calvasina, head of U.S. equity strategy at RBC Capital Markets, wrote in a note.

This year's downturn is a pivotal shift for the market after its swift and strong post-pandemic rally. The S&P 500 rose 114.38% from its closing low on March 23, 2020, to its Jan. 3 record closing high this year.

Earlier this year, the Nasdaq confirmed it was in bear market territory, the first of the three major U.S. indexes to hit such levels.