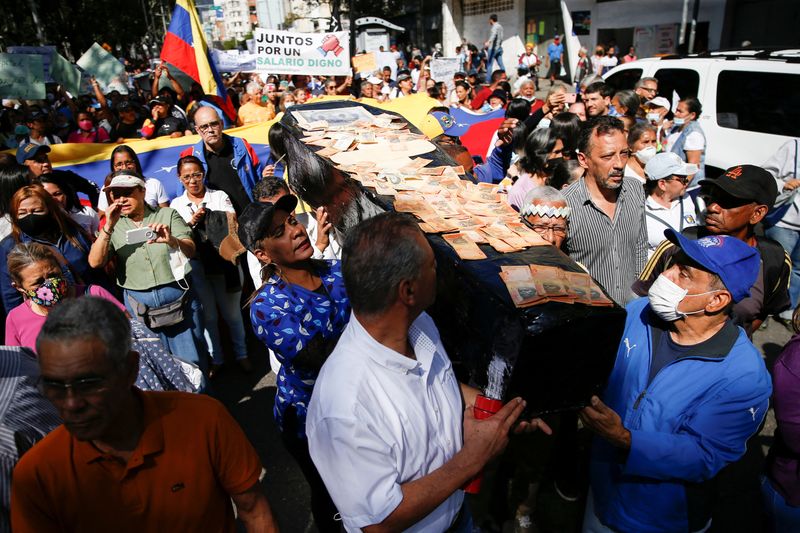 (Reuters) - Teachers, retirees and workers' unions marched in at least six Venezuelan cities on Monday to demand better salaries, as the government of President Nicolas Maduro faces renewed challenges in its attempt to fight inflation.

Venezuela's inflation is estimated to have reached 305% last year, according a nongovernmental group of economists who calculate indicators in the absence of official data.

The government has not adjusted the salaries of public- sector employees since March last year, part of efforts to reduce spending and increase taxes which allowed Venezuela to emerge from hyper-inflation.

But in the second half of last year demand for foreign currency outstripped the weekly supply of dollars made available by the central bank and the bolivar depreciated further.

The minimum monthly salary for a public school teacher is about $10, while university professors earn between $60 and $80.

"Our salaries are peanuts. I earn 460 bolivars a month (about $23)," said Odalis Aguilar, a 50-year-old teacher who marched in the city of Maracay. "We need a living wage."

In the central state of Carabobo, teachers and public employees also held demonstrations, saying salaries do not cover the cost of food and medicine.

"Our food is carbohydrates, no protein, few vegetables, it is very basic," said Reina Sequera, a professor at the University of Carabobo and the main breadwinner in her family of three. "We can't even afford acetaminophen."

Over the weekend the government paid public employees a bonus equivalent to $29.80, according to the exchange rate estimated by the central bank.

Dozens of teachers carried banners at a march in San Cristobal, the capital of border state Tachira. Some featured images of skulls in reference to what demonstrators called their "starvation wages."

The bonus "does not reach $30. Is that what Maduro lives on? You're throwing us crumbs," said Gladys Chacon, president of the Tachira College of Teachers.