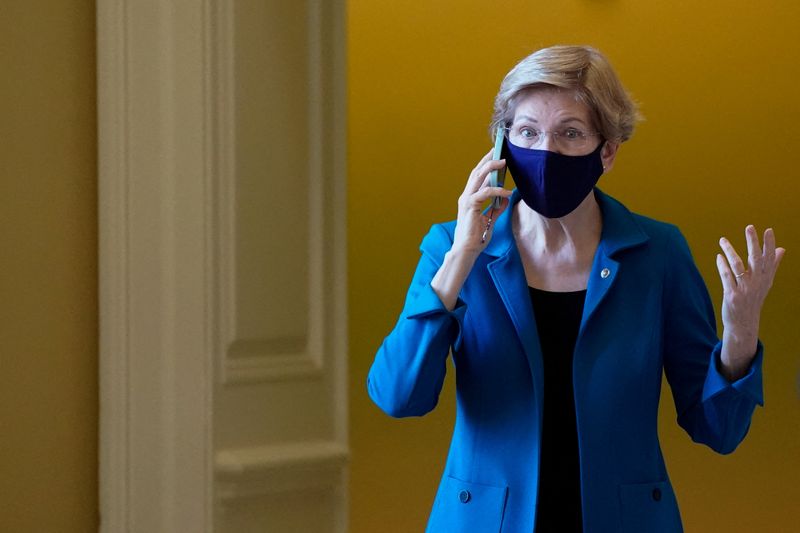 (Reuters) - U.S. Senator Elizabeth Warren sharpened her criticism of the Federal Reserve on Monday over its handling of an ethics scandal at the central bank ahead of the renomination hearing of Fed Chair Jerome Powell.

Warren, a Democrat and member of the Senate Banking Committee, is one of the lawmakers Powell will appear before on Tuesday as the committee considers whether to progress his renomination. She has already said she will not support his reappointment to the post. Powell is expected to be reconfirmed.

"I am deeply concerned that your continued refusal to release information about Fed officials' trading is at odds with your stated commitment to address the scandal 'forthrightly and transparently' and... it raises suspicions that the Fed may be failing to disclose the full scope of the scandal to the public," Warren wrote in a letter to Powell.

Her new letter, following two earlier requests for information from the central bank last year, comes after a report in the New York Times last week that Fed Vice Chair Richard Clarida had corrected his previous financial disclosure late last month. The updated disclosure showed he sold a stock fund and then swiftly rebought it shortly before the Fed announced a barrage of rescue programs to stem the economic fallout from the pandemic.

The latest controversy follows the resignations of two regional Fed bank presidents, Dallas Fed President Robert Kaplan and Boston Fed President Eric Rosengren, last year in the wake of an outcry over their trading activities during the pandemic.

Powell has since announced new ethics rules governing financial holdings and dealings at the central bank but Warren has requested a Securities and Exchange Commission investigation into Fed officials' trading activity to determine if any trades violated insider trading rules.

In her letter, Warren renewed her calls for the Fed to disclose all ethics communications provided to Fed officials in 2020 and 2021. She requested a response by Jan. 17.