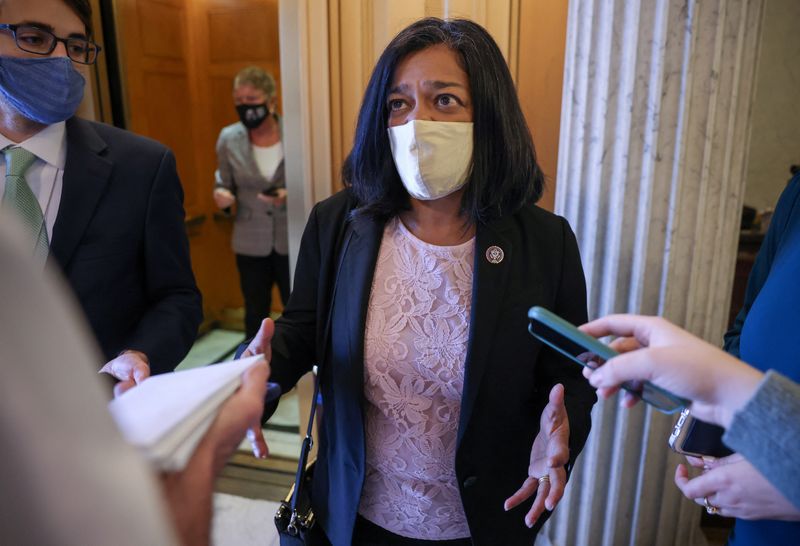 (Reuters) - U.S. Representative Pramila Jayapal, a leading liberal House Democrat, has asked President Joe Biden to continue focusing on his social spending legislation and urged him to use executive action despite Senator Joe Manchin's public rejection of the plan.

In an opinion piece in the Washington Post on Sunday, Jayapal, chair of the Congressional Progressive Caucus (CPC), wrote that the CPC will soon release a plan for some actions like lowering costs, protecting the health of families, and tackling climate action.

"The Progressive Caucus will continue to work toward legislation for Build Back Better, focused on keeping it as close to the agreed-upon framework as possible", she wrote in the newspaper https://wapo.st/32jgLRb.

Manchin, a conservative Democratic senator, rejected the president's "Build Back Better" plan last Sunday in a move that imperils the legislation.

"Taking executive action will also make clear to those who hinder Build Back Better that the White House and Democrats will deliver for Americans", Jayapal wrote.

Manchin's support is crucial in a chamber where the Democrats have the slimmest margin of control and Republicans are united in their opposition to the bill. Senate Majority Leader Chuck Schumer has said the chamber would vote on a package in early 2022.

The White House said on Wednesday that conversations with Manchin's office will continue. Biden said on Tuesday that he and Manchin were "going to get something done" on the legislation.