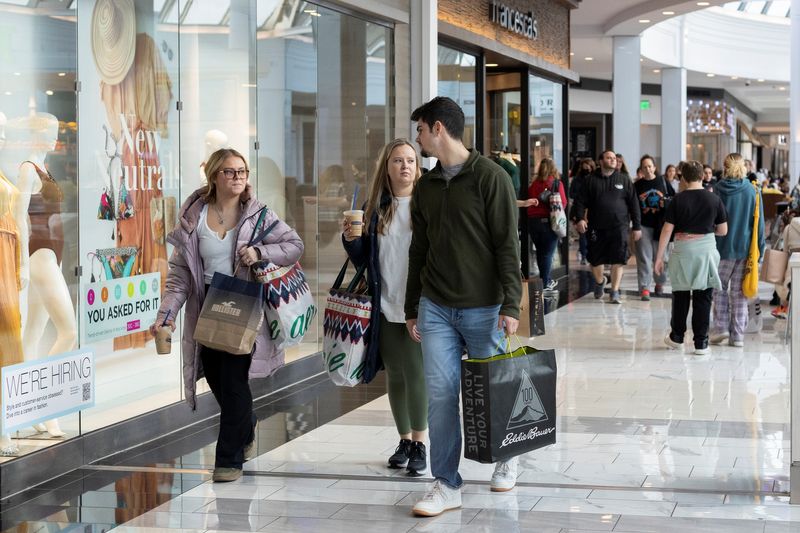 WASHINGTON (Reuters) -U.S. consumer price growth slowed sharply in April as gasoline prices eased off record highs, suggesting that inflation has probably peaked, though it is likely to stay hot for a while and keep the Federal Reserve's foot on the brakes to cool demand.

That aspect was reinforced by the report from the Labor Department on Wednesday, which also showed underlying monthly inflation pressures building up again after a brief lull in March as airline tickets prices notched their biggest increase on record. Rents rose by the most since 2006.

"The country’s struggle with high inflation isn't over yet, but the markets can still breathe a sigh of relief that it is not getting any worse," said Christopher Rupkey, chief economist at FWDBONDS in New York. "The Fed can stay on plan with 50 bps rate hikes at the next two meetings in June and July and there is no reason to move more expeditiously to fight inflation."

The consumer price index increased 0.3% last month, the smallest gain since last August as gasoline prices fell 6.1% after soaring 18.3% in March. That stood in sharp contrast to the 1.2% month-to-month surge in the CPI in March, which was the largest advance since September 2005. The drop in gasoline blunted a 0.9% increase in food prices.

But the deceleration in the monthly CPI is probably temporary. Gasoline prices are rising again and were about $4.161 per gallon early this week after dipping below $4 in April, according to the Energy Information Administration.

Russia's unprovoked war against Ukraine is the main catalyst for the surge in gasoline prices. The war has also driven up global goods prices.

Inflation was already a problem before Moscow's Feb. 24 invasion of Ukraine because of stretched global supply chains as economies emerged from the COVID-19 pandemic after governments around the world injected large amounts of money in pandemic relief and central banks slashed interest rates.

President Joe Biden on Tuesday acknowledged the pain that high inflation was inflicting on American families and said bringing prices down "is my top domestic priority."

The Fed last week raised its policy interest rate by half a percentage point, the biggest hike in 22 years, and said it would begin trimming its bond holdings next month. The U.S. central bank started raising rates in March.

U.S. stocks were higher. The dollar fell against a basket of currencies. U.S. Treasury yields rose.

In the 12 months through April, the CPI increased 8.3%. While that was the first deceleration in the annual CPI since last August, it marked the seventh straight month of increases in excess of 6%. The CPI shot up 8.5% in March, the largest year-on-year gain since December 1981.

Though monthly inflation will likely pick up, annual readings are likely to subside further as last year's large increases fall out of the calculation, but remain above the Fed's 2% target at least through 2023.

China's zero tolerance COVID-19 policy is seen putting more strain on global supply chains, driving up goods prices. Prices for services like air travel and hotel accommodation are also seen keeping inflation elevated amid both strong demand over the summer and a shortage of workers.

Excluding the volatile food and energy components, the CPI picked up 0.6% after rising 0.3% in March. The so-called core CPI increased 6.2% in the 12-months through April. That followed a 6.5% jump in March, which was largest gain since August 1982.

A key measure of rents, owners' equivalent rent of primary residence, jumped 0.5% last month. That was the largest gain since June 2006 and followed a 0.4% rise in March.

Americans also paid more for healthcare, with the cost of hospital services increasing 0.5% and doctor visits rising 0.2%, but prices for prescription drugs were unchanged. There was some respite from high inflation, with apparel prices falling 0.8%.

The biggest drop since May 2020 ended six straight months of increases. Communication costs fell for a third consecutive month, while prices for used cars and trucks declined 0.4%.