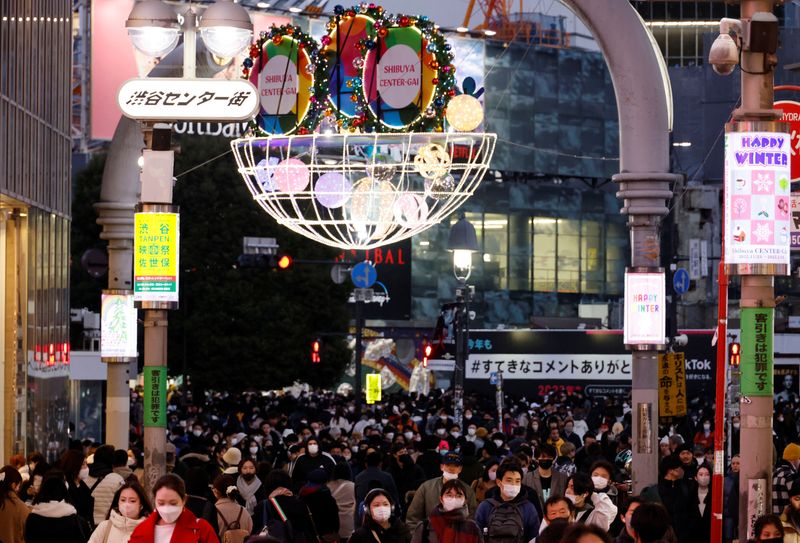 TOKYO (Reuters) - Consumer prices in Japan's capital likely rose in December at the fastest pace in nearly 41 years, a Reuters poll of economists showed on Friday, as the market looks to inflation data for clues on a possible shift in monetary policy.

The core consumer price index (CPI) in Tokyo, a leading indicator of nationwide inflation trends, was expected to have climbed 3.8% in December from a year earlier on widening retail price rises, according to the median estimate of 16 economists.

That would follow a 3.6% increase in November and hit a fresh high since April 1982's 4.2% rise, when inflation was still hot in the aftermath of the 1970s' oil crises.

"Although global commodity prices have come down to the pre-Ukraine war levels and weakness in the yen has abated, price hikes in goods and services will likely continue since many Japanese firms haven't been able to reflect higher input costs on their selling prices," said Takeshi Minami, chief economist at Norinchukin Research Institute.

Japan's CPI figures have drawn unusual attention as traders look for any hints ahead of the Bank of Japan's Jan. 17-18 rate review that it may start to exit from its ultra-loose policy. The central bank jolted the market last month with a surprise tweak to its long-term yield cap, allowing rates to rise more.

Economists in the poll also expected the first month-on-month contraction in household spending in three months in November, a worrying sign for a consumption-led recovery of the world's third-largest economy.

Household spending likely dropped 0.5% in November from the previous month, while it was forecast to have risen 0.5% from the same month a year earlier, according to the poll.