Time to buy: Retail investors swoop in when stocks falter 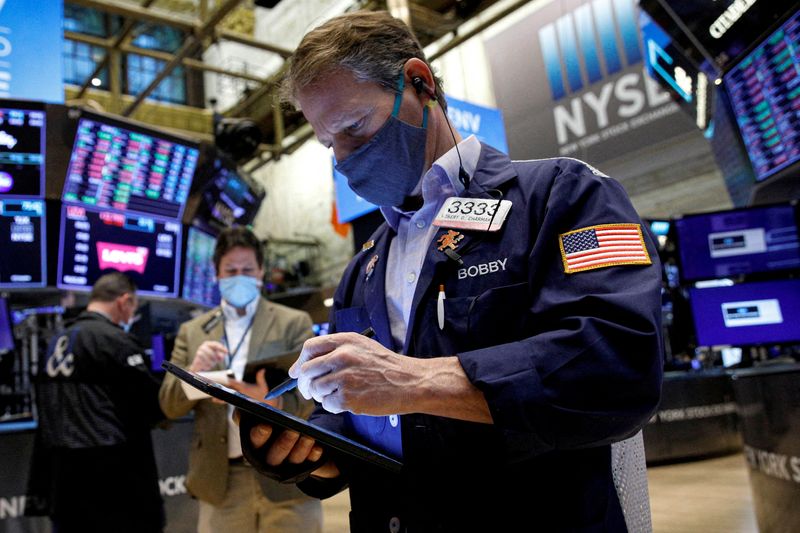 NEW YORK (Reuters) - U.S. retail investors have been dip-buyers so far in 2022, snapping up equities that funds have shed from their portfolios in light of a more hawkish Federal Reserve, but with a focus on quality stocks as opposed to speculative names.

Growth and technology stocks, which typically generate lower returns in higher-interest rate environments, have had a rocky start to the year as big investors respond to expectations the Fed will raise interest rates as many as four times in 2022, driving short-dated Treasury yields to nearly two-year highs.

Still, weakness in stocks has been met with retail investors seeing opportunities to buy. On Monday, after falling almost 3% earlier in the day the technology-heavy Nasdaq recouped all its losses for the day in afternoon trading, and it gained again on Tuesday.

"Buy the dip has been successful for how many – 8 or 10 years now – and I think that people still see opportunities when they look around for potential investments and the U.S. stock market is still the best game in town," said JJ Kinahan, chief market strategist at retail brokerage TD Ameritrade, which is owned by Charles Schwab (NYSE:SCHW) Corp.

Clients of TD Ameritrade returned to buying this month after having been net-sellers in December, with heavy selling in the final week of the year as the Omicron COVID-19 wave began to hit hard, said Kinahan.

The busiest day this year for Apex Clearing, which processes trades for brokerages including SoFi Technologies Inc and Firsttrade, was Jan. 5, when the S&P 500 dropped around 2%, with a buy-to-sell ratio of 1.91, a spokesperson for the company said. The S&P experienced a similar drop the next day, and retail investors were again net-buyers, she said.

Individual investors have been focusing on stocks such as Tesla (NASDAQ:TSLA) Inc and Apple Inc (NASDAQ:AAPL), as well as tech-focused and leveraged exchange-traded funds (ETFs), while they have been net-sellers of stocks related to gaming, sports, and cannabis themes, said Giacomo Pierantoni, analyst at investment research firm Vanda (NASDAQ:VNDA).

"Retail investors have continued to buy massively large-cap tech, providing a cushion, and ETFs, but they've stopped buying all the speculative assets," such as cryptocurrencies and highly speculative stocks, he said.

With risk appetite still low, some of the main picks in the past week for TD Ameritrade clients have been big tech stocks such as Apple and Microsoft (NASDAQ:MSFT) Inc Corp, as well as blue-chips, including McDonald's Corp (NYSE:MCD), Walt Disney (NYSE:DIS) Co and AT&T Inc (NYSE:T), Kinahan said.

Retail investors have become a bigger force in the markets in the past couple of years as retail brokerages have moved to commission-free trading and social media has made it easier for individuals, many working from home due to the pandemic, to coordinate on trading ideas. That can put them at odds with the patterns of institutional investors.

Bank of America (NYSE:BAC) Securities analysts said retail clients and hedge funds were buyers of U.S. equities last week, with around $500 million in net buys, as the S&P 500 fell 1.9%.

The bank's institutional clients, meanwhile, began the year with their biggest outflows since mid-January of 2021.

That phenomenon was also seen on Monday when retail investors notched their third consecutive day of buying more than $1 billion in equities, according to a note from JPMorgan (NYSE:JPM) analysts.

Monday's net total of $1.07 billion in equities bought by retail was in the 93rd percentile of historical data, they said. That stands in contrast to institutional investors which have been net-sellers.