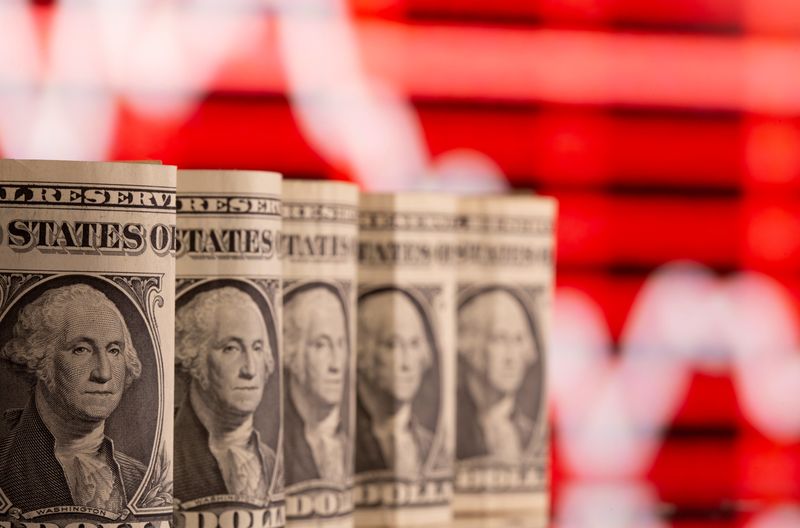 © Reuters. U.S. one dollar banknotes are seen in front of displayed stock graph in this illustration taken February 8, 2021. REUTERS/Dado Ruvic/Illustration

By Karin Strohecker and Sujata Rao

Almost all past emerging market crises were linked to dollar strength. As the dollar rises, developing countries must tighten monetary policy to head off falls in their own currencies. Not doing so would exacerbate inflation and raise the cost of servicing dollar-denominated debt.

For all the improvements of recent decades, those equations still broadly hold and the recent dollar rally is leaving a trail of destruction in its wake.

Soaring commodity prices are another complication, alongside the tumble in China's yuan - an anchor for Asian and commodity currencies.

"The cracks are widening. When a strong dollar intersects with high commodity prices, it's not strange that we get problems in emerging markets," said Manik Narain, head of emerging markets strategy at UBS.

"And when the yuan weakens there are no winners in EM."

Dollar appreciation has pushed an emerging currency index down 3.5% this year to an 18-month trough, though that masks bigger 9%-15% losses on currencies such as Poland's zloty and Turkey's lira. Losses also picked up in April, coinciding with the yuan downturn.

Flexible exchange rates do shield developing economies against a repeat of crises of the 1990s.

Back then, a surge in the U.S. currency and Treasury yields first sparked Mexico's 'Tequila' crisis in 1994, subsequently sending shockwaves across Asia, Russia and Brazil as dollar pegs collapsed one-by-one.

As recession worries spread around world markets, the shine is coming off this year's bright spot - commodity-exporting Latin America. The copper-reliant Chile's peso gained 8% in the first quarter, only to fall 10% since then.

Central banks across the developing world have jacked up interest rates by hundreds of basis points cumulatively to tame inflation and ensure a sufficient inflation-adjusted bond premium to rising U.S. yields.

As a result, emerging economies may expand just 4.6% this year, the World Bank forecasts, compared with an earlier 6.3% prediction.

Rising Treasury yields spell higher cost of capital globally, but are especially painful for countries which gorged on dollar borrowing.

Higher debt costs, alongside economic mismanagement and political unrest, have combined to propel Sri Lanka into full-blown crisis, and the same scenario could be repeated elsewhere, investors fear.

Trang Nguyen, emerging markets strategist at JPMorgan predicted bond sales to pick up, though, "even if this has to come at a higher cost, as countries will eventually need to plug their financing gaps".

Rates are eye-watering: annual inflation in Argentina runs above 50%, in Turkey at 70%. Even wealthier emerging economies such as Hungary are seeing double-digit inflation.

The International Monetary Fund expects inflation to average 8.7% in emerging markets this year - some 2.8 percentage points higher than projected in January.

Turkey, Tunisia, Egypt, Ghana and Kenya are among countries seen at risk, due to their hard-currency debt burdens, current account deficits and heavy reliance on food and energy imports.

"Commodity prices are a key axis of vulnerability and if we see renewed upside to oil and food, we may see a growing list (of casualties)," said UBS' Narain.