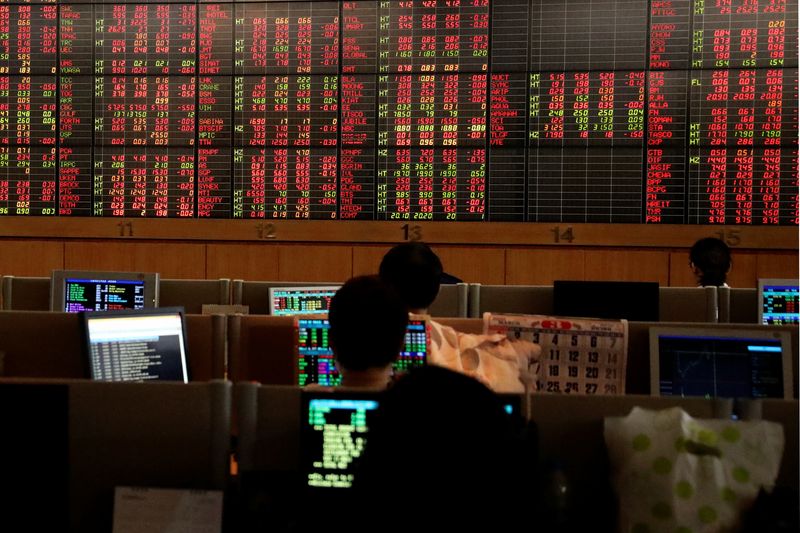 © Reuters. Traders are seen in front of a screen with trading figures in red at Thailand Stock Exchange building in Bangkok, Thailand March 13, 2020. REUTERS/Juarawee Kittisilpa

TLI was the most actively traded stock on the Bangkok stock exchange with over 639 million shares changing hands, data showed.

TLI shares were priced at 16 baht, and the sale of 2.3 billion shares raised at least 34.4 billion baht ($937 million), with about half coming from investors who bought before the deal went public, according to regulatory filings.

The flat debut is in line with Thailand's listed insurance sector, which has weakened over the past month.

Share prices of major insurance stocks have fallen by about 5.3% since TLI published its revised prospectus on June 24 ahead of its IPO launch, according to Global Equity Research analyst Arun George, who publishes on Smartkarma.

"Given the past growth record for the company, we see no reason for it to trade at a premium to its embedded value and hence, the shares will probably head lower," said Sumeet Singh, Aequitas Research director.

Thailand's economy was among the slowest in the region to recover from the impact of the pandemic, according to the latest report from the Asian Development Bank.

TLI has the third-largest market share among Thai insurers and competes with other market leaders - AIA, FWD and Muang Thai Life Assurance. It plans to use funds from the IPO to invest in digital transformation and strengthening partnerships.

The insurer's IPO has been the largest equity capital market deal in Southeast Asia in 2022, according to Refinitiv data. There were $2.45 billion worth of IPOs in the region in the first half of 2022, compared with $6.1 billion in the same period last year.