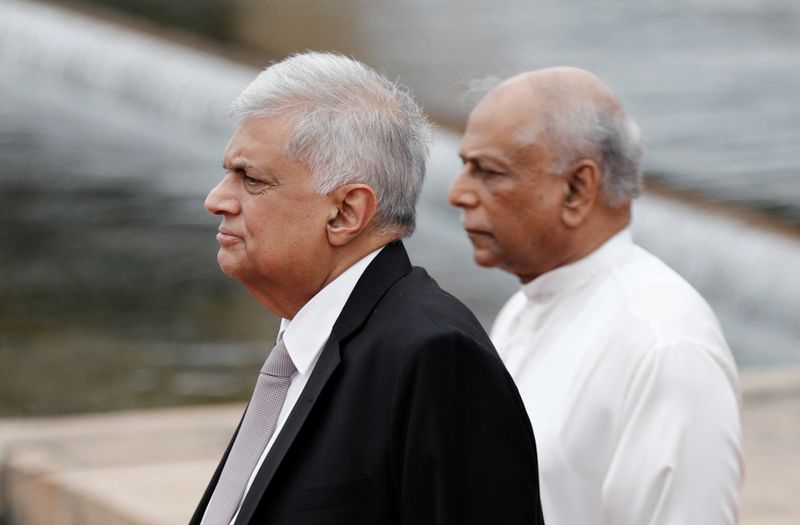 © Reuters. FILE PHOTO: Sri Lanka's President Ranil Wickremesinghe and Prime Minister Dinesh Gunawardena look on after attending the inauguration of a new session of parliament and the first policy statement by Wickremesinghe, amid the country's economic crisis, in C

By Uditha Jayasinghe and Channa Kumara

COLOMBO (Reuters) - Sri Lanka is considering a restructure of local and sovereign debt, President Ranil Wickremesinghe said on Friday, as the island nation battles its worst financial crisis in its independent history.

The country is due to restart bailout talks with the International Monetary Fund (IMF) in August in the hope of securing $3 billion in funding.

The government is working with its financial and legal advisers Lazard (NYSE:LAZ) and Clifford Chance to finalise a plan to restructure overseas debt, including about $12 billion owed to bondholders.

"Have we got to look at local debt? That has far-reaching consequences," Wickremesinghe told a conference in Colombo. "The financial advisors are looking at both things."

The IMF has also previously warned countries of issues restructuring local debt, pointing to the impact on domestic banks.

"Restructuring domestic debt is like surgery - you only do it if you must, and you avoid it if it might do more harm than good," officials at the IMF said in a blog post in December.

Hit hard by the pandemic, which decimated the vital tourism industry, and by tax cuts pushed through by the government of then-President Gotabaya Rajapaksa, Sri Lanka is experiencing its worst economic crisis since independence from Britain in 1948.

Some protesters began vacating a protest site in the commercial capital Colombo on Friday, despite police declining to enforce an order to remove them.

Lawyers for the government told the Supreme Court on Friday it would not seek to remove protesters from the site - known as Gota Go Gama, or village, in mocking tribute to Rajapaksa - until Aug. 10, a lawyer involved in the hearing told Reuters.

Police had earlier given protesters until 5 p.m. (1130 GMT) on Friday to vacate the site.

Some protesters, however, were seen taking down tents at the site, opposite the country's Presidential Secretariat, ahead of the Supreme Court decision.

"We are not dismantling because of the police order," Gayan Madushanka, a 26-year-old protester, told Reuters.

"For the moment we are leaving this place to continue the struggle which took place all over the country. The struggle will not end."