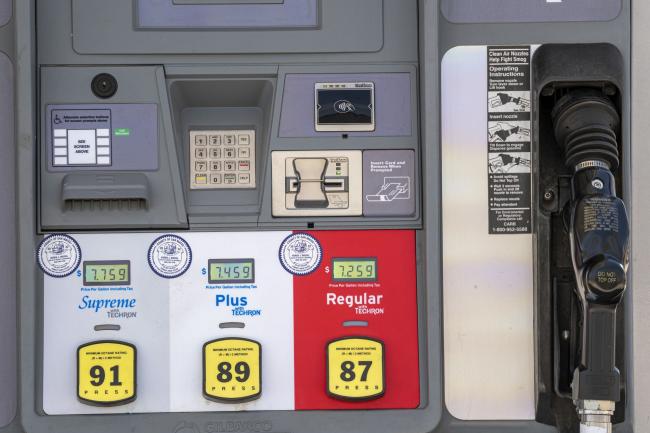 © Bloomberg. A fuel pump at a Chevron gas station in Menlo Park, California, US, on Tuesday, May 24, 2022. The price of a regular gallon of gas is more than $4 in all 50 states for the first time, while in California, drivers are paying an average $6.07 per gallon to fill up their car.

(Bloomberg) -- Cooling pump prices and futures contracts are signs that the US gasoline market may be taking a breather amid slower demand growth and higher refinery runs.

The average national pump price in the US fell slightly overnight for the first time in nearly three weeks, according to data from auto club AAA. The glimmer of softness echoes a weaker futures market, where a third straight day of declines in New York trading saw the Nymex RBOB contract settle below $4 a gallon on Tuesday for the first time in more than two weeks. But at $5.014 a gallon, US drivers are still paying more than 60% at the pump to fill up their car compared with the same time a year ago.

The summer driving season, which began with the Memorial Day weekend at the end of May, saw fuel consumption rise to the highest year-to-date level. But gains lagged prior seasonal levels, stoking concerns that elevated prices are holding some travelers back. Meanwhile, refinery runs are the highest ever for this time of year on the US Gulf Coast and East Coast, according to the Energy Information Administration.

Macro factors are at work as well, said John Kilduff, founding partner of Again Capital.  “The steady drip of layoff notices could turn into a tsunami, and if the labor market falters, then gasoline demand will fall as a result,” Kilduff said in an email to Bloomberg. Growing fears of a recession will also hinder gasoline demand early in the cycle, he added.

Given futures prices typically dictate prices paid at the pump, “some relief” may be coming, said Linda Gieseckle, an analyst with ESAI.