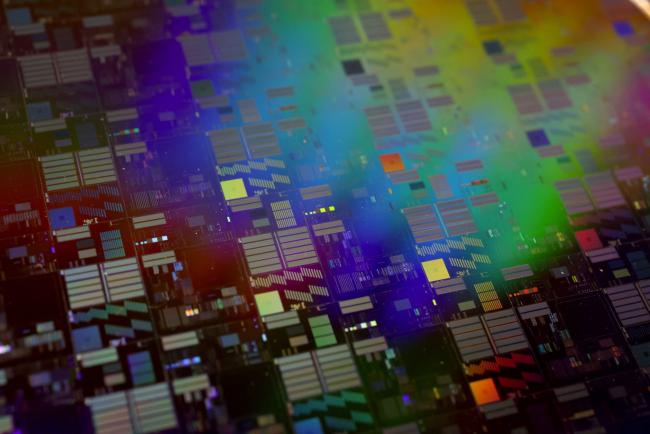 © Bloomberg. A 300 millimetre silicon wafer in the clean rooms at the Globalfoundries fabrication (fab) plant in Dresden, Germany, on Thursday, Feb. 11, 2021. The EU outlined a goal last year to produce at least one-fifth of the world’s chips and microprocessors by value, without giving details on how this would be achieved. Photographer: Liesa Johannssen-Koppitz/Bloomberg

(Bloomberg) -- The US Senate’s bipartisan bill to strengthen the nation’s technology sector in the face of Chinese competition was estimated Thursday to increase US budget deficits by $79 billion over a decade if enacted.

The nonpartisan Congressional Budget Office’s scoring of the package is in line with expectations, and isn’t expected to impair its chances for passage -- even if it hardens opposition among conservatives touting deficit concerns. The Senate on Tuesday opened debate on the bill by a tally of 64 to 34.

The CBO found that the draft bill would boost spending by $55 billion over 10 years, while reducing tax revenue by $24 billion.

Not included in the CBO score are provisions in the bill that call for $200 billion in additional research spending, but which don’t actually appropriate the funds from the Treasury to do that.

Senate Majority Leader Chuck Schumer has moved the Senate toward a final vote on the package and has the support of House Speaker Nancy Pelosi, who said she expects a strong bipartisan vote in the House next week.

Schumer filed an amendment with bipartisan provisions to the bill on Wednesday night, setting up a vote as soon as Friday in the Senate. Senators eager to spend the weekend in their home states are likely to schedule final votes on the bill early next week.

Senator Rob Portman and some Republican allies are pushing for a vote to further amend the bill to include provisions bolstering security for sensitive research. Such an amendment would require all 100 senators to agree at this point, and some Democrats are arguing that opening the bill up for additional changes is a slippery slope that could invite endless tweaks.

However, Portman said he isn’t conditioning he support for the bill on getting his amendment.

The conservative group Heritage Action urged Republicans to oppose the bill over the deficit spending.

“Not only does this bill further fuel Biden’s inflation fire by giving $52 billion in handouts to the profitable semiconductor industry, but it also fails to properly address Chinese espionage,” Heritage Action Executive Director Jessica Anderson said in a statement. “Most egregiously, the legislation does not bar companies that do business in China from receiving subsidies.”

Senator Mike Crapo, the top Republican on the Finance Committee, said he had opposed Tuesday’s initial procedural vote “because I saw this coming.” Nevertheless, Crapo had advocated for the bill’s tax credits for chipmakers.

“We can’t keep driving the deficit up,” Crapo said.

His GOP Senate colleague Todd Young, one of the bill’s chief proponents, said fellow Republicans should follow the party’s support of the government’s “fundamental responsibility” to invest in national security.

“We invest what is needed to keep the American people safe and secure and defend our way of life,” Young said. “That’s what we’re doing here.”