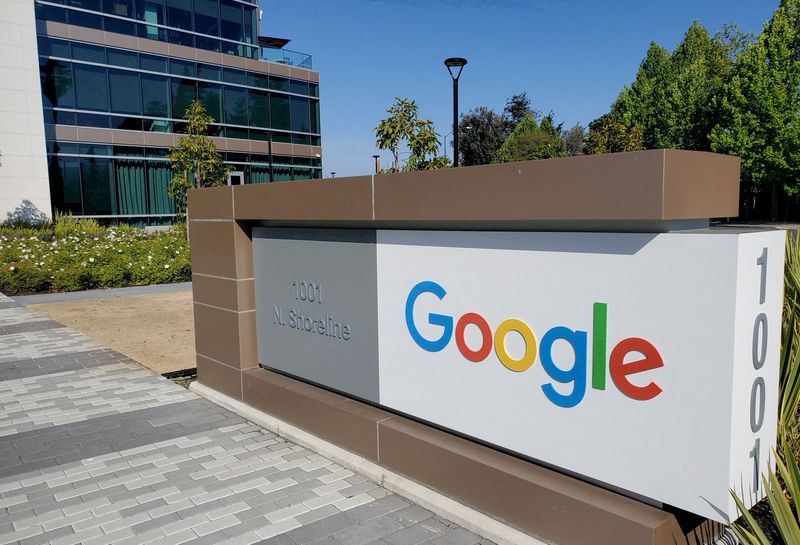 © Reuters. FILE PHOTO: A sign is pictured outside a Google office near the company's headquarters in Mountain View, California, U.S., May 8, 2019. REUTERS/Paresh Dave//File Photo

MOSCOW (Reuters) - A Moscow court on Friday said it was fining Alphabet (NASDAQ:GOOGL)'s Google 7.2 billion roubles ($98 million) for what it said was a repeated failure to delete content Russia deems illegal, the first revenue-based fine of its kind in Russia.

Moscow has increased pressure on big tech this year in a campaign that critics characterise as an attempt by the Russian authorities to exert tighter control over the internet, something they say threatens individual and corporate freedom.

Google said in an email it would study the court ruling before deciding on further steps.

Meta Platforms did not immediately respond to request for comment.

Russia has imposed small fines on foreign technology companies throughout this year, but Friday's penalties mark the first time it has exacted a percentage of companies' annual Russian turnover, greatly increasing the sum of the fine.

It did not specify the percentages, although Reuters calculations show Google's fine equates to just over 8%.

Russia has ordered companies to delete posts promoting drug abuse and dangerous pastimes, information about homemade weapons and explosives, as well as ones by groups it designates as extremist or terrorist.

Google, which has paid more than 32 million roubles in fines over content violations this year, is at odds with Moscow on a number of issues.

Last week, a sanctioned Russian businessman claimed victory over Google in a court case that could see the tech giant hit with another heavy fine.

Moscow has also demanded that 13 foreign and mostly U.S. technology companies, which include Google and Meta Platforms, be officially represented on Russian soil by Jan. 1 or face possible restrictions or outright bans.