Russian central bank trims key rate to 7.5%, says easing could be over soon 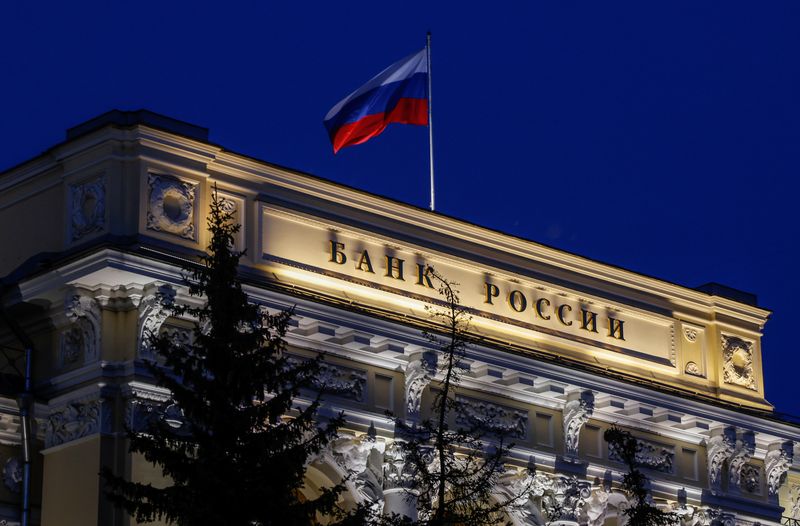 By Andrey Ostroukh and Alexander Marrow

MOSCOW (Reuters) -Russia's central bank lowered its key interest rate by 50 basis points to 7.5% on Friday, suggesting that its rate-cutting cycle may be close to an end as inflationary expectations rise and omitting guidance about studying the need for future cuts.

The bank now expects consumer prices to rise by 11-13% in 2022, compared with the previous forecast of 12-15%, supporting the decision to cut and with the economy needing cheaper lending to limit a slump.

It was the fifth scheduled board meeting and the sixth overall where the main rate has been cut this year. In the immediate aftermath of Moscow's despatch of armed forces into Ukraine on Feb. 24, the central bank had hiked its key rate to 20% from 9.5% in order to mitigate risks to financial stability.

"As we are close to the end of the easing cycle, we accept that the next step, as well as holding the rate, could be a hike," Governor Elvira Nabiullina said at a news conference. "However, we do not rule out a rate cut either."

Nabiullina said the bank had considered cutting by 50 or 25 basis points, as well as holding the rate at 8%, on Friday.

The 50-basis-point cut was in line with a consensus forecast of analysts polled by Reuters earlier this week.

The central bank omitted forward-looking rate guidance from the statement, saying that the inflation expectations of households and businesses remained elevated.

"There is no direct signal in today's press release. And this is a clear indication that the rate-cutting cycle may be over," said Evgeny Suvorov, an economist at CentroCreditBank.

The central bank said it will take into account actual and expected inflation dynamics along with risks posed by domestic and external conditions and the reaction of financial markets when making its next rate-setting decision.

The rouble showed limited reaction to the rate move, hovering near 60 against the dollar, but edged slightly lower as Nabiullina spoke.

Inflation stood at 14.1% as of Sept. 9. The central bank reiterated its hope that inflation would slow to 5-7% in 2023 and said tighter monetary policy may be needed to bring inflation to its 4% target in 2024 if Russia's budget deficit expands.

"It cannot be ruled out that the central bank will start raising rates as early as in the first half of next year," said Suvorov from CentroCreditBank.

High inflation dents living standards and has for years been one of Russians' main concerns. However, the economy currently needs stimulation in the form of cheaper credit to address the negative effects of sanctions against Moscow over Ukraine.

The central bank maintained its forecast for a 4-6% economic contraction this year but said the decline in gross domestic product may be closer to 4%. In late April, it had expected GDP to shrink 8-10%.

The next rate-setting meeting is scheduled for Oct. 28.