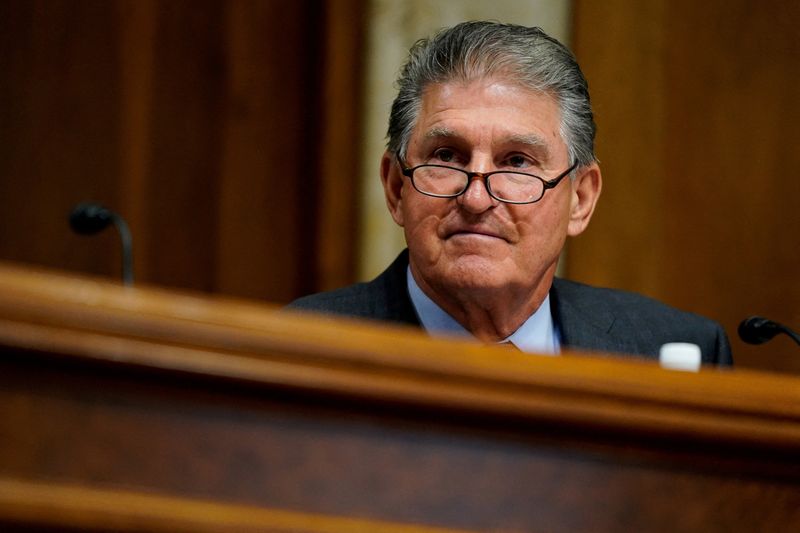 WASHINGTON (Reuters) - A corporate minimum tax proposed this week in a congressional spending bill would not bring the United States into compliance with a separately negotiated 137-country deal for a global minimum tax.

Although both taxes are the same rate - 15% - they are separate items that apply differently to companies.

Manchin told https://wvmetronews.com/podcast/talkline West Virginia Metro News radio on Thursday that the bill does not include an "offshore" minimum tax, adding: "Our international corporations, we didn't do anything that would cause them to be uncompetitive in the global market."

If passed, the climate and healthcare investment bill would leave the U.S. Treasury without a path to implement the 15% global minimum tax deal approved by Organisation for Economic Cooperation and Development countries in October 2021.

To comply, the Treasury would need to raise the current overseas minimum corporate tax known as "GILTI" from 10.5% to 15% - a move opposed by Republicans and by Manchin in the past.

President Joe Biden, a Democrat, supports the corporate minimum tax bill, which would fulfill a campaign promise to make U.S. corporations pay more than the dwindling percentage of the federal budget they have contributed since the 1940s.

It will finance the Democrats' slimmed-down $430 billion climate change and prescription drugs bill. But lawmakers, congressional aides, and tax experts say it will not bring the country into compliance on the global minimum tax. The U.S. Treasury also acknowledged that additional compliance steps were needed.

"Accordingly, its adoption does not bring the U.S. rules into alignment with the global minimum tax architecture embodied in Pillar Two of the OECD proposal," Corwin said.

A key distinction in the Schumer-Manchin bill are allowances for certain business tax credits, such as for research and development and other investments, unlike in the global minimum tax plan.

Under the global minimum tax, U.S. companies with big tax credits could comply with the proposed domestic minimum but still be subject to a top-up tax on overseas profits, Corwin said.

Some who oppose the global minimum tax, including Manchin, say this would diminish the benefits of such credits.

U.S. Treasury Secretary Janet Yellen, who was a driving force behind the 15% global minimum tax deal last year and has cajoled holdout countries to support it, is not giving up on U.S. implementation.

Referring to the new legislation, a U.S. Treasury official said: "The Inflation Reduction Act’s domestic corporate minimum tax is an important provision to ensure large corporations pay their fair share in taxes. The global minimum tax remains a top priority of the Biden Administration and there are still steps needed to bring the United States into compliance."

When Manchin walked away from negotiations on a spending bill earlier this month, Yellen said she would look for every opportunity to enact the global corporate minimum tax, which she helped negotiate.If other countries move ahead with the minimum tax plan, they would be able to collect top-up taxes from U.S. companies that would otherwise flow to the Treasury, Yellen has argued, putting pressure on U.S. lawmakers to implement the tax and keep those revenues in the United States instead.