Peru expects lower economic growth on impact of mine protests 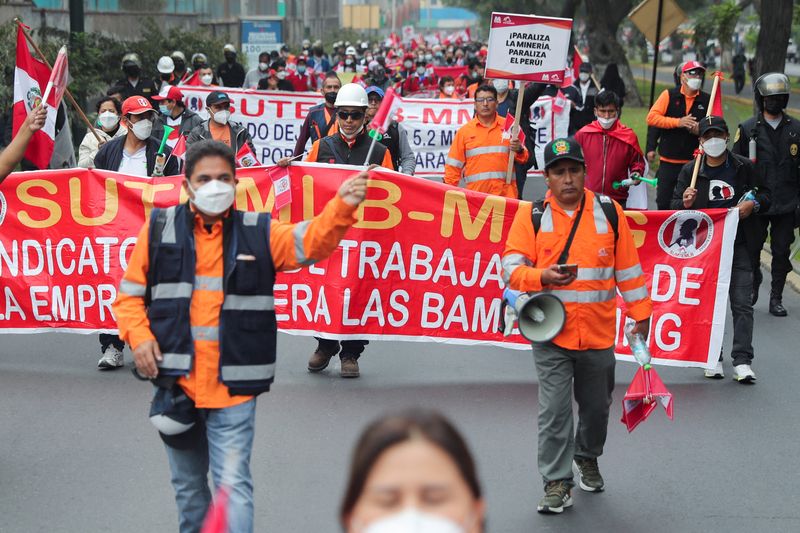 © Reuters. Workers of the Las Bambas mine take part in a protest against the suspension of the mine, in Lima, Peru, June 2, 2022. REUTERS/Sebastian Castaneda

Peru's central bank lowered its 2022 growth projection to 3.1% from 3.4% previously, while maintaining its estimate for 3.2% growth next year, bank president Julio Velarde said in a presentation.

Velarde cited persistent mining conflicts, in addition to the impact of the Russia-Ukraine war, as driving the downwardly revised growth projection.

Protests by indigenous people have disrupted Peru's mining sector in recent months, including a 51-day shutdown at China-based MMG Ltd's Las Bambas copper mine, a top global producer of the red metal.

"Other sectors are behaving better than we expected in March. What is falling is mining," said Velarde.

Velarde said he sees mining investment falling by nearly 5% this year, and a much steeper fall potentially in 2023.

"If no new projects appear next year ... there will be a contraction in mining investment next year of almost 16%."

The bank's projections also include a lower fiscal deficit this year of 1.9% of gross domestic product compared to 2.5% previously projected in March, principally due to higher revenue, Velarde said.

Annual inflation in May reached 8.09%, its highest level in two dozen years, leading the bank to raise its benchmark interest rate to 5.5% earlier this month.