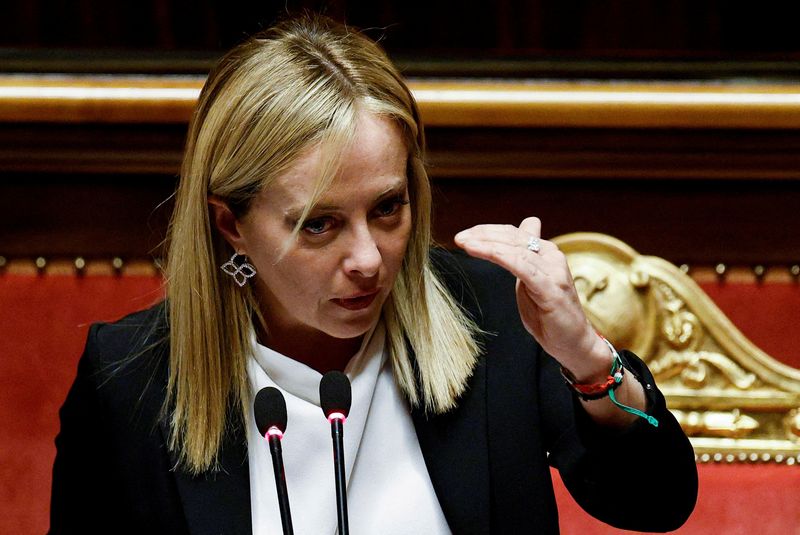 © Reuters. FILE PHOTO: Italy's Prime Minister Giorgia Meloni speaks during a session of the upper house of parliament ahead of a confidence vote for the new government, in Rome, Italy, October 26, 2022. REUTERS/Guglielmo Mangiapane/File Photo/File Photo

ROME (Reuters) - Italy's new right-wing government plans to announce some 30 billion euros in new spending on Monday in a budget for next year, mainly focused on curbing the impact of high energy prices while postponing some of its most lavish election promises.

The continued energy crisis, triggered by Russia's invasion of Ukraine, means Prime Minister Giorgia Meloni and her allies will not be able to make good on their more extravagant electoral campaign promises, including swingeing tax cuts.

"We won't be able to do everything, all at once. Past attempts to do that have ended in disaster," Industry Minister Adolfo Urso told La Stampa newspaper on Sunday.

Meloni has already said that roughly two thirds of the additional spending power would be used to help companies and households survive record-high gas and electricity bills. This comes on top of some 75 billion euros splashed out in 2022 to tackle surging energy prices.

The cabinet this month lifted the 2023 deficit target to 4.5% of gross domestic product from a 3.4% forecast made by the previous government of Mario Draghi. But ministers say they will be fiscally prudent, and avoid the budget errors that unseated Britain's former prime minister Liz Truss.

As a result, campaign pledges by the far-right League party for a generous reform of the pension system have been delayed, and while the budget will include a reduction of the tax burden on labour, large scale income tax cuts have been ruled out.

In an effort to help families face up to eye-watering inflation, which under the EU-harmonised index hit 12.6% year-on-year in October, the cabinet is considering eliminating sales tax on core essentials such as milk and bread.

Additional borrowing will pay for some of the spending pledges, but around 3 billion euros in new revenues are expected to be raised via a windfall tax on profits of energy companies that have benefited from sky-high oil and gas prices.

Looking to carve out savings, Meloni is also expected to start rolling back a "citizens' wage" poverty relief scheme.

Leftist parties say the measure is vital given the troubled state of the economy, but coalition parties say it is enabling the unemployed to dodge the jobs market.

"(Payments) will be stopped for those aged 18-59 who can work. But it won't happen at once. There will be a transition phase in 2023," government undersecretary Giovanbattista Fazzolari told Corriere della Sera newspaper.

Once the cabinet approves the budget, parliament will have until Dec. 31 to pass it into law.