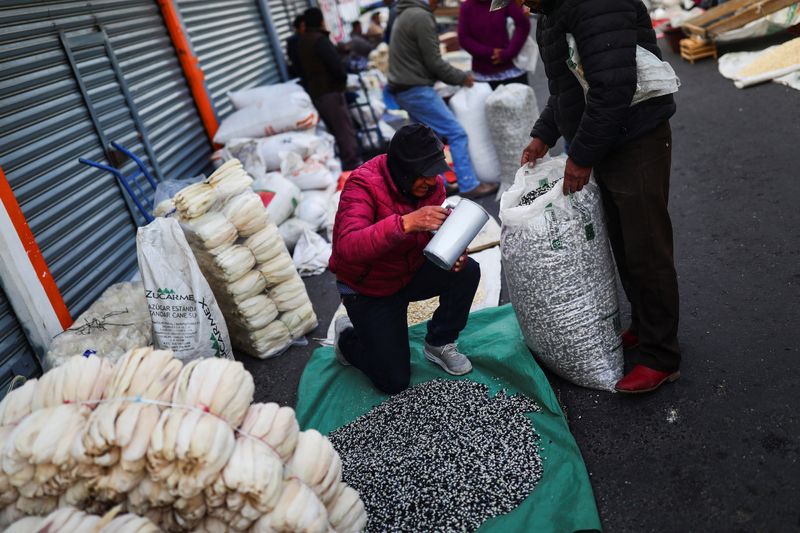 MEXICO CITY (Reuters) - Mexico's annual headline inflation is forecast to have eased in the first half of November but to have stayed well above official targets, a Reuters poll showed Tuesday, leaving the door open to further interest rate hikes by the country's central bank.

The median forecast of 16 analysts sees annual headline inflation slowing to 8.24% from the 8.28% recorded in the second half of October.

While annual inflation continues its deceleration from a peak of 8.77% in the second half of August, core inflation is now expected to rise to 8.60%, a level not seen since August 2000.

The core index, seen as a better measurement of inflation because it strips out volatile food and energy prices, is seen climbing 0.30% in the first 15 days of the month compared to the previous half-month period.

Meanwhile, headline consumer prices are expected to have risen 0.65% in the period.

The forecasts keep annual inflation far above the Bank of Mexico's target of 3% plus or minus one percentage point.

Banxico, as the central bank is known, has raised Mexico's benchmark interest rate 600 basis points since June 2021, lifting the rate to its current 10%.

The bank is scheduled to hold its next monetary policy meeting on Dec. 15, when analysts expect a 50-basis-point rate increase after four consecutive hikes of 75 basis points.

Mexico's statistics institute will release inflation data for the first half of November on Thursday at 6 a.m. (1200 GMT).