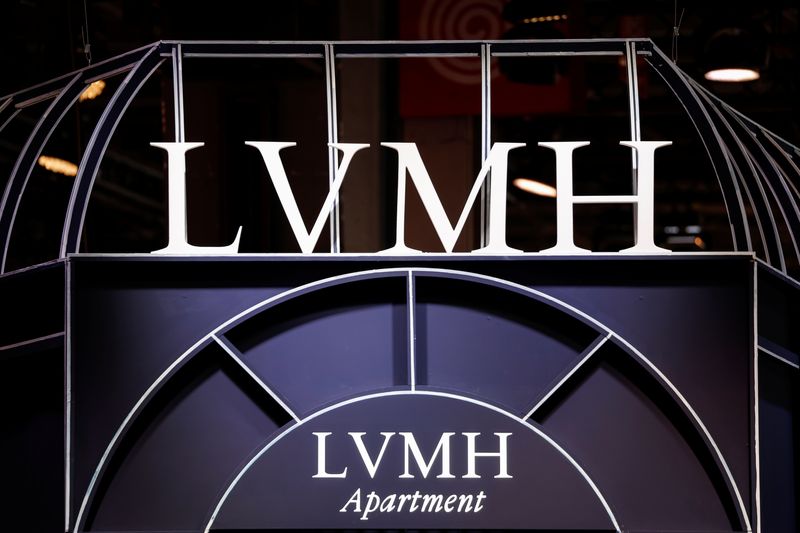 © Reuters. A logo of LVMH is seen at its exhibition space, at the Viva Technology conference dedicated to innovation and startups at Porte de Versailles exhibition center in Paris, France June 15, 2022. REUTERS/Benoit Tessier

The French group, which owns dozens of high-end labels ranging from Tiffany to Moet & Chandon, has tapped strong post-pandemic demand for its designer labels as socialising resumes and shoppers continue to spend savings from lockdowns, brushing off concerns about turbulent stock markets and rising prices.

Growth pace in the second quarter was a tad slower than in the first three months of 2022, when group sales had climbed by 23%.

LVMH's organic revenue in Asia excluding Japan fell by 8% year on year, revealing the impact of new COVID-19 restrictions imposed in some Chinese cities from mid-March, though price increases had helped to reduce the impact on sales.

Demand for fashion and leather goods from star labels Louis Vuitton and Dior eased slightly from the high levels at the start of the year, with sales up 19%.

Sales in the wine and spirits division bounced back strongly from logistical and supply constraints earlier in the year, growing 30%, while selective retailing, which includes cosmetics brand Sephora, rose 20%.