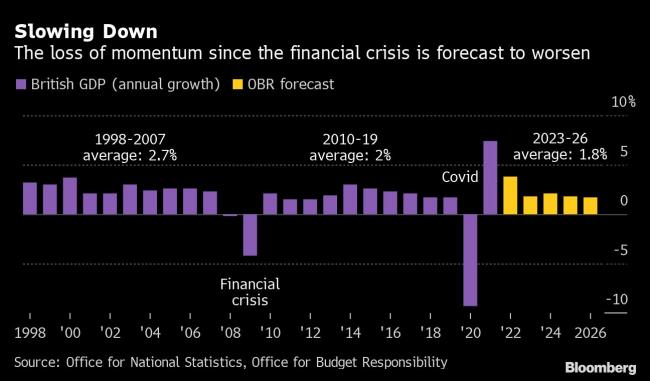 (Bloomberg) -- Liz Truss’s plan for growth, melding the biggest tax giveaway in half a century with Thatcherite deregulation, is a straight-up gamble with Britain’s future, and even before her chancellor of the exchequer had finished delivering it on Friday the bet was starting to sour.

The market’s verdict on the £220 billion policy blitz set out by Kwasi Kwarteng was swift and devastating. Sterling crashed below $1.11 for the first time since 1985, taking its slump for the year to date to 19%. Five-year gilts posted their biggest ever daily decline.

“The markets will do what they will,” Kwarteng, 47, said when challenged in the House of Commons over the mayhem that he had unleashed.

Even before the chancellor’s statement, former Bank of England policy makers were warning that Prime Minister Liz Truss’s determination to cut taxes regardless of the circumstances risked pushing the UK into a sterling crisis.

There was still a sense of shock in how far her chancellor went, scrapping the top rate of income tax in a boost to the highest earners, as well as delivering on cuts to corporate taxes, national insurance contributions and levies on home purchases that had been flagged in advance.

The final total didn’t even included the full cost of capping household energy bills for the next two years. That could add another £100 billion to taxpayers’ liabilities.

The tax cuts will cost the Treasury around £161 billion over the next five years. A further energy guarantee will add about £60 billion to that sum in the next six months, the only figure the Treasury provided.

Those eye-watering figures had analysts reaching for the history books to compare the package with famous policy errors of the past. The reaction -- with the pound falling even as traders priced in steeper hikes in interest rates to offset the increase in inflationary pressures -- is the sort of movement that is usually limited to emerging market currencies.

“Investor confidence is being eroded fast,” George Saravelos, global head of foreign exchange research at Deutsche Bank (ETR:DBKGn). He called for an emergency interest rate hike from the Bank of England.

The reaction leaves Truss and Kwarteng in a terrible bind. Truss, also 47, took office less than three weeks ago. Her efforts to stamp her authority on the government were interrupted by the death of Queen Elizabeth II, which brought politics to a halt for 10 days. And Truss has a desperate need to show that she can steer the UK through the global energy crisis.

She was elected Tory party leader over the summer due to her popularity with the membership. But two thirds of her lawmakers voted against her, and there were mutterings of a potential no-confidence vote before she’d even taken office.

The fear among investors is that Truss’s tax cuts will give the economy no more than a quick sugar rush, sending the debt ballooning and inflation spiraling, before a crash that leaves no lasting improvement on longer term growth.

Even the government’s fans were lukewarm in their support. Crispin Odey, a Tory backer and founder of the hedge fund Odey Asset Management where Kwarteng once worked as an analyst, said: “They are trying the right things, but there has to be a risk we are going into a Barber boom, by pushing the button on inflation.”

That’s reference to the ill-fated 1972 budget drawn up by Kwarteng’s Tory predecessor Anthony Barber. Barber, like Kwarteng, delivered a massive package of unfunded tax cuts which, in his case, saw the economy overheat and inflation soar before collapsing into recession. Barber’s boss, Edward Heath, was defeated by the Labour opposition two years later, and the UK had to seek a bailout from the International Monetary Fund in 1976.

“The policies announced in Chancellor of the Exchequer Kwasi Kwarteng’s mini-budget will provide the economy with a sugar rush over the next year, but we highly doubt it’ll deliver the gear shift in growth that the government is banking on. That means it will lift inflation at a time when the Bank of England is trying to cool price pressure and, because the policy package is unfunded, put debt on an unsustainable path.”

Truss similarly may have less than two years before she also has to call an election.

Truss has been clear that what matters to her is increasing the economic pie, rather than worrying about how it is divided.

That boldness is most evident in the central gamble at the heart of the mini-budget. Success hinges on a single number: Kwarteng’s 2.5% growth target, which is almost a whole percentage point above the official forecast for the next three years and a level last seen before the 2008 financial crisis.

If the government can lift GDP growth by a percentage point, the tax cuts will pay for themselves by the end of five years, according to the Treasury documents published on Friday. At that point, the government will have stabilized the national debt, fixed the UK’s productivity conundrum and given the country the competitive advantage of lower taxes.

Martin Weale, a former Bank of England rate setter now at King’s College London, described the growth target as “pie in the sky.” The government can’t be sure it will get 2.5% growth, but it can be sure that the tax cuts put the public finances in a perilous position, he said.

The Resolution Foundation projected that government borrowing as a share of GDP will rise for the net five years, adding a total of £411 billion to the existing £2.3 trillion debt pile.

At the same time, the benefits of the tax cuts are skewed towards the highest earners -- who traditionally are more likely to vote Conservative. Someone earning £200,000 will be £5,220 a year better off as a result of the tax cuts, while a worker on £20,000 will gain just £157.

“After 12 years of running the country, the Tories desperately need to establish a record of delivery quickly if they want to cling on to power,” said Ryan Shorthouse, chief executive of the Bright Blue think tank. “The prime minister and chancellor are going for broke.”