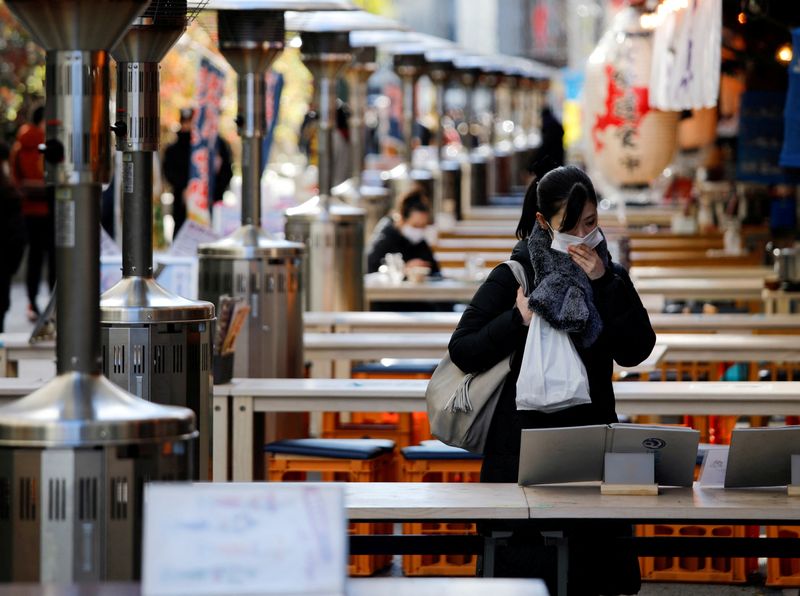 © Reuters. FILE PHOTO: A woman wearing protective a face mask is seen at an open-air restaurant as the government declared the second state of emergency for the capital and some prefectures, amid coronavirus disease (COVID-19) outbreak, in Tokyo, Japan January 9, 20

The marked slowdown in activity in the sector offered an early warning sign that Japan's economy may struggle to stage a convincing recovery, a worrying trend for a country greatly exposed to fluctuations in global growth.

The figure showed activity came in slightly above the 50-mark that separates contraction from expansion.

"The Japanese services economy signalled that demand conditions had broadly stagnated at the start of the second half of the year as the boost from the wider reopening of the economy waned," said Usamah Bhatti, economist at S&P Global (NYSE:SPGI) Market Intelligence, which compiles the survey.

"Panel members commented that weaker economic conditions, partly due to inflation and uncertainty, had weighed on the sector."

Average cost burdens faced by services firms remained elevated, coming in at the second-highest rate in the survey's history after June's record.

The composite PMI, which is estimated by using both manufacturing and services, slipped to a five-month low of 50.2 from June's 53.0 final.

"A renewed fall in manufacturing output and stalling aggregate new orders contributed to the weaker reading."