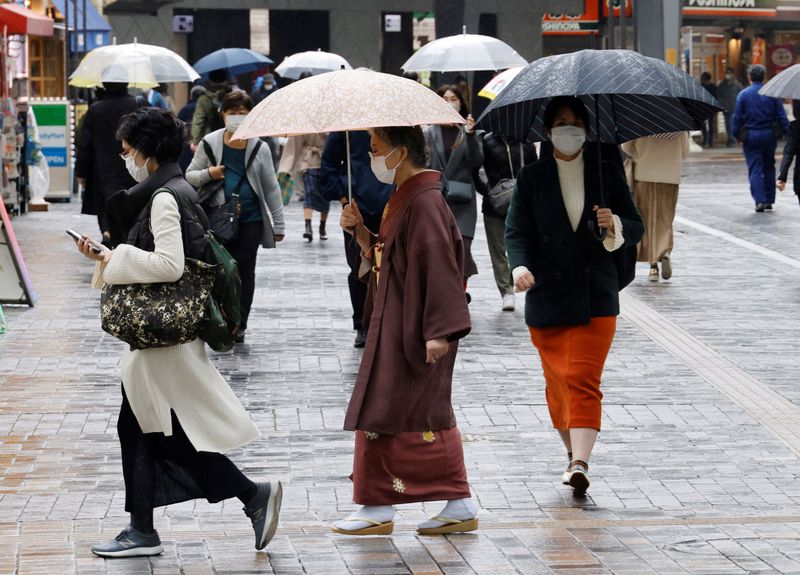 © Reuters. FILE PHOTO: A woman in a traditional costume makes her way at a shopping district in Tokyo, Japan November 15, 2022. REUTERS/Kim Kyung-Hoon

TOKYO (Reuters) - Japanese government on Friday called for doubling a tax-free stock investment programme for households, to encourage savers to put more money in riskier assets rather than hoarding it only in cash and savings accounts.

The proposed changes to the Nippon Individual Saving Account (NISA) programme aim to double the number of accounts to 34 million and the amount of investment to 56 trillion yen ($404 billion) over the next five years.

Under the current scheme, holders can only invest up to 1.2 million yen ($8,600) annually in stocks and investment trusts. The accounts offer a five-year tax exemption on returns.

The programme is part of Prime Minister Fumio Kishida's "new capitalism" scheme to boost average household wealth and asset holdings, which has shifted emphasis to investment after an early proposal to review the country's capital gains taxes failed to gain traction.

Kishida has also taken his Japan investment campaign abroad, telling bankers and investors in the City of London in May this year that "Japan is a buy."

Japanese households hold more than half of their 2,000 trillion yen in financial assets as cash and in savings accounts.

But while those assets have risen only 40% over the last 20 years, in the United States and Britain, where households invest more of their assets in stocks and investment trusts, financial assets have risen by 3.4 times and 2.3 times, respectively, from 20 years ago.

The government presented the proposals at a panel meeting on Friday and aims to reflect them in Japan's annual tax reform plan to be compiled at the end of this year.

The proposals include making NISA, launched in 2014, a permanent programme while raising the upper limit for investment.

The task force on Friday also urged reforms for individual defined contribution pension plans - known as iDeCo - including raising the age limit for enrolling in the scheme.