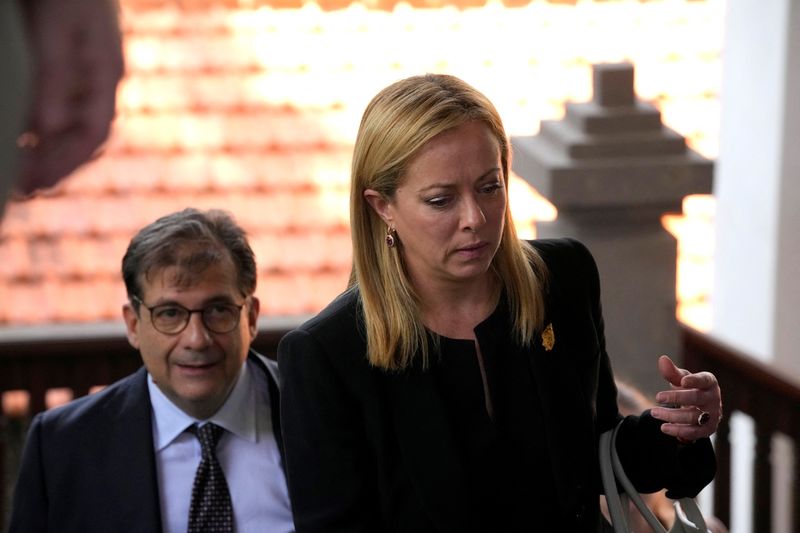 By Giuseppe Fonte and Gavin Jones

ROME (Reuters) -Italian Prime Minister Giorgia Meloni presented her government's first budget on Tuesday, calling it a "courageous" package even as the opposition said it targeted the poor and planned street protests.

The 2023 budget, approved by cabinet in the early hours of the morning after three hours of discussion, focuses on curbing sky-high energy bills and cutting taxes for payroll workers and the self-employed.

It now goes to parliament, which must pass it by the end of the year.

"I consider it a courageous and coherent budget, courageous in the sense that it bets on the future," Meloni told reporters, adding that she had taken tough decisions regardless of the consequences for her new government's popularity.

The package, which contains almost 35 billion euros ($35.84 billion) of extra spending and tax cuts, aims to speed a recovery in the euro zone's third largest economy which the Treasury says will contract in this quarter and the next.

The main opposition parties dismissed the budget as inadequate to tackle recession and double-digit inflation, and accused the government of targeting the poor by cutting a "citizens' wage" poverty relief scheme for the unemployed, introduced in 2019.

The budget allocates over 21 billion euros next year in tax breaks and bonuses to help firms and households pay electricity and gas bills.

This comes on top of some 75 billion euros of similar measures approved this year.

A further 4.2 billion euros are set aside next year to cut the "tax wedge" - the difference between the salary an employer pays and what a worker takes home - with the benefit going to low income workers.

Among numerous other measures, the budget lowers the retirement age, offers fiscal incentives to encourage hiring on open ended contracts, reduces penalties for people who have not paid their taxes, and plans a bridge to connect Sicily to the mainland - a long-time pet-project of Italy's right.

Next year's budget deficit is targeted at 4.5% of gross domestic product, up from a 3.4% forecast made in September.

Extra borrowing will finance 60% of the 35 billion euros of economic support, while other sources of funding include an increase in a windfall tax on energy companies that have benefited from the surge in oil and gas prices.

With a tax rate rising from 25% to 35% from January to July 2023 and calculated on profits instead of revenues, the new levy will raise some 2.5 billion euros next year, Meloni said.

It follows a framework proposed by the European Commission and replaces a scheme that triggered criticism and refusals to pay from numerous energy firms.

The curbs on the citizens' wage, which the rightist coalition says discourages people from seeking work, is particularly contentious.

Next year, able-bodied people of working age will only be able to draw the benefit for a maximum of eight months, ahead of abolition of the scheme in its current form from Jan 1, 2024.

Antonio Misiani, the PD's economics spokesman, called the budget "war on the poor and favours for tax evaders."

Meloni, who has always opposed the citizens' wage, insisted it was wrong "to put people who can work on the same level as those that can't."

"Faithful to our principles, we'll keep helping those who can't work. For the others it will be abolished," she said.