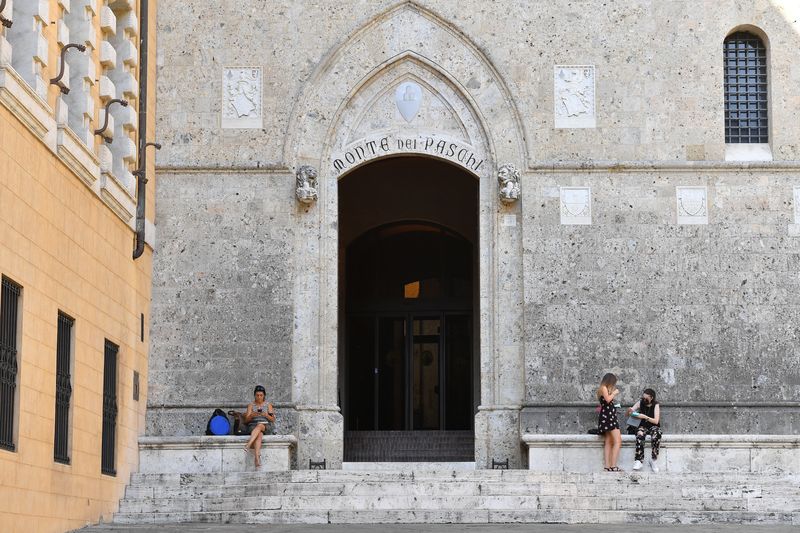 © Reuters. People stay at Piazza Salimbeni entrance to the headquarters of Monte dei Paschi di Siena (MPS), the oldest bank in the world, which is facing massive layoffs as part of a planned corporate merger, in Siena, Italy, August 11, 2021. REUTERS/Jennifer Lore

ROME (Reuters) - Italy is beefing up a 1.5-billion-euro ($1.6 billion) money pot destined for state-owned bank Monte dei Paschi di Siena (MPS), three sources close to the matter said, adding it was still unclear by how much it would increase it.

The sources said that MPS would get part of 925 million euros in additional funds Italy set aside this week for capital injections into state-controlled companies.

The bank has previously said it needs 2.5 billion euros in capital but the actual size of its capital shortfall will be set only after new Chief Executive Luigi Lovaglio readies a new business plan in June.

MPS warned in its 2021 financial report that the cash call size may need to be revisited in light of the Ukraine crisis.

The Italian state owns 64% of MPS following a 2017 bailout, which means it would provide around 1.6 billion euros if MPS raised 2.5 billion euros in capital.

The fact that part of the new funds are destined for the Tuscan bank may indicate that the capital needs could be higher than the flagged 2.5 billion euros. However, one of the sources said it was too early to have a final figure.

The capital increase will determine which portion of the funds will go to MPS, the source added.

Back in October, when the Treasury failed to clinch a sale of MPS to healthier rival UniCredit, a source close to the sale had told Reuters the cash raising could reach 3.5 billion euros.

However, since then the Treasury has replaced the MPS CEO, putting veteran UniCredit banker Lovaglio at the helm.

Lovaglio is reviewing MPS' accounts as he prepares a new restructuring plan. The cash call is slated for the autumn.

The 925-million-euro funds are part of a broader stimulus decree approved by Prime Minister Mario Draghi's government on Monday.

The decree, not yet published but seen by Reuters, says the government can use the funds by the end of this year to strengthen companies subject to state control, without giving detail.

Part of the funds are also likely to be injected into unlisted state-controlled firms including Eutalia, which helps the Treasury plan investment programmes under the European Union's Recovery Fund, the sources added.