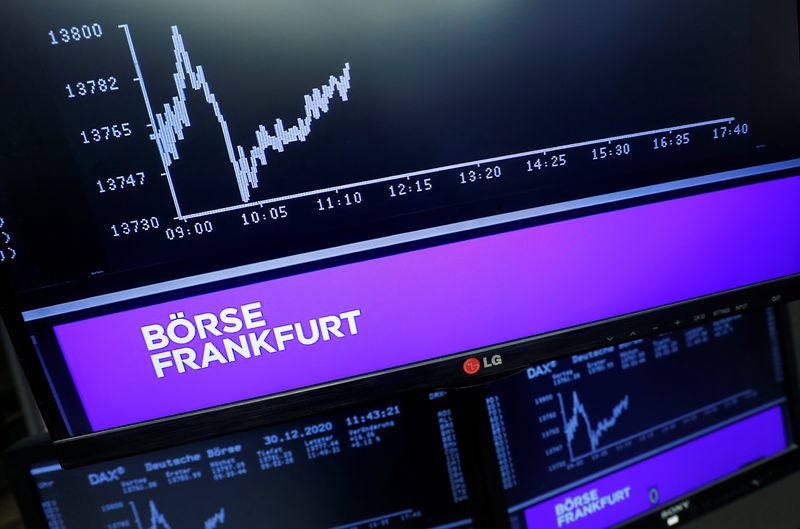 LONDON (Reuters) - Global stocks were little changed on Wednesday as investors kept their powder dry ahead of an expected interest rate hike by the U.S. Federal Reserve, whose accompanying statement will help determine next moves in financial markets.

The MSCI global stocks index was down 0.1%, while the STOXX index of European companies eased 0.4%.

The 10-year U.S. Treasury yield was just below the closely watched 3% level, while oil prices bounced as the European Union proposed more sanctions on Russia in response to its invasion of Ukraine, including an oil embargo to be phased in by year-end.

Markets expect the Fed to raise rates by half a percentage point at 1800 GMT - the most in a single day since 2000 - to curb inflation, and to detail plans to reduce its $8.9 trillion balance sheet.

"The bigger question is what will the Fed's guidance be for rate hikes next month. Will we get another 50 basis points in June, and what's the timeline for balance sheet reduction?" said Michael Hewson, chief markets analyst at CMC Markets.

The global monetary tightening cycle has reached a symbolic milestone, with yields on German, British and U.S. 10-year government debt topping 1%, 2% and 3% respectively, levels not seen in years. That has in turn raised borrowing costs for businesses and households.

The Bank of England is also expected to lift UK interest rates on Thursday by a quarter of a percentage point, which would be its fourth hike in a row to quell surging prices.

"U.S. markets are just about hanging on and how hawkish the Fed is likely to be is fairly key. There is a risk that the Fed could under-deliver and pull yields lower," Hewson said.

Crude oil prices gained as the EU gave details of its planned ban on Russian oil imports and other new sanctions targeting Russia's top lender Sberbank and Russian broadcasters, which would be blocked from European airwaves.

Australia's central bank raised its key rate by a bigger-than-expected 25 basis points, lifting the Aussie dollar as much as 1.3% and hitting local shares.

The yield on 10-year Treasury notes was slightly firmer at 2.973%, after breaching the key milestone of 3% for the first time since December 2018 on Monday.

The dollar index was slightly firmer, along with the euro,. Gold also firmed, with bitcoin gaining 2.5% to $38,701.