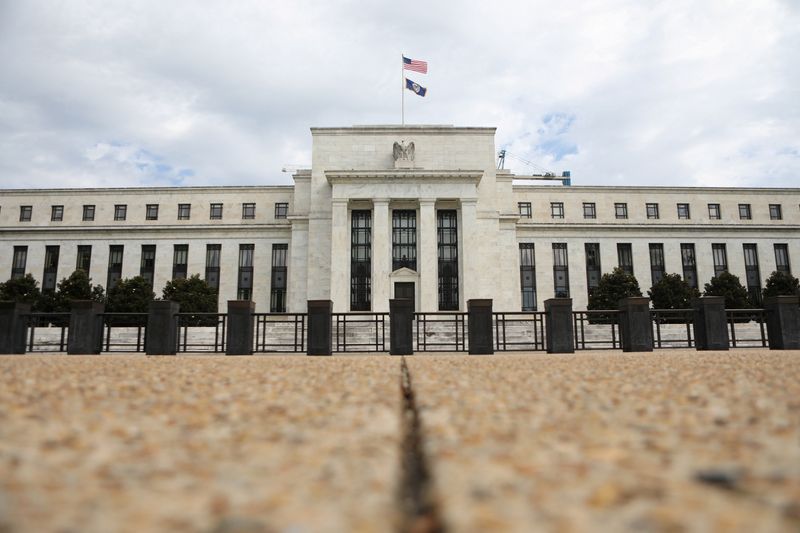 After a bruising start to the year, world markets caught a break in July.

Some relief was perhaps due after Ukraine-related energy and food price shocks in February compounded a post-pandemic inflation spike and forced months of dramatic re-pricing of interest rate, bond and stock markets.

Rates markets are already peering over the hump and despite all the hawkishness from central banks feel the worst of the episode may have passed - even if visibility is limited for policymakers and investors alike.

Futures markets now see U.S. Federal Reserve policy rates peaking by the turn of the year at about 3.35% - about one percentage point above current rates, but also some 65 basis points below where they saw the so-called 'terminal rate' in mid-June and now occurring three months earlier than assumed back then.

As significantly, they pencil in about half a point of rate cuts from there through 2023.

Exaggerated a bit by this week's U.S.-China tensions over Taiwan, 10-year U.S. Treasury yields dropped almost a full percentage point in just six weeks to as low as 2.51% while inflation-adjusted yields fell back to zero. The inversion of 2-10-year yield curve, often cited as the most accurate harbinger of recession, deepened to most since the dot.com recession at the turn of the century.

And significantly, market inflation expectations captured in both five- and 10-year index-linked bonds are both now solidly back below 3% - the latter below 2.5%. What's more, Brent crude oil prices - down almost 30% from March peaks - dipped back below $100 per barrel this week and wheat futures have returned to pre-Ukraine invasion levels as ships resumed deliveries of Ukrainian grain this week.

While recession pricing and the monetary policy squeeze may explain much of this, hardy fans of the much-lampooned 'transitory' inflation thesis - abandoned by the Fed and other central banks late last year - feel the latest twist just underlines how the post-pandemic inflation surge remains primarily a supply shock that will ultimately normalise.

Overall demand in the economy will prove to be little different when these distortions wash out and super-easy monetary settings from pandemic are removed, they argue.

In a presentation to the G20 last month, Bank for International Settlements economist Hyun Song Shin reinforced the supply shock message by showing how inflation jumped even though the rebound in real GDP in both developed and emerging economies remained substantially below the five-year pre-pandemic trend.

"The charts...reinforce the message that the recent surge in inflation is not simply a story of excess demand that overwhelmed the pre-pandemic trend supply of the economy," he wrote. "Rather, it is a case of diminished supply capacity that has not kept pace with the recovery to trend."

"There does not seem to be sufficient appreciation for the fact that the global economy is still operating at levels substantially below its historical potential," he said.

"My own guess is that, over time, much of the inflation plaguing the world now will eventually turn out to be 'transitory'...driven by supply-side factors that are not permanent, are beyond the control of central banks, and will most likely not contaminate long-run inflation expectations."

For Jen, myriad arguments in support of a new era of higher inflation - from changing geopolitics, 'de-globalisation' and supply chain rethinks to ageing demographics, tight labour markets and an energy transition - have mostly been assembled after the inflation surge and remain unproven at best as durable long-term factors.

But if inflation does indeed subside again over coming quarters, he argues that higher equities, lower bond yields and a slightly weaker dollar will be the result.

While other investors sympathise with this view, they feel the uncertainties are just too great in the midst of a tightening cycle to bet the farm on either outcome just yet. And many asset managers appear reluctant to jump on July's rally.

"We lean more towards fading the rally in risk assets than chasing it," said Paul O'Connor, head of Multi-Asset at Janus Henderson Investors. "We can envisage a fundamental path higher for risk assets from here, but it is a narrow one."

The problem for anyone trying to work this out is that even if you believe this bout of inflation is just down to temporary supply distortions, unpredictable political calculations make it impossible to time a resolution with any surety. And converts to the idea of a 'new paradigm' think the longer those distortions persist, the more inflation expectations will entrench anyway.

The energy, food and supply chain skews related to tensions over Ukraine or souring relations between Washington and Beijing over Taiwan - not to mention the outcome of November's mid-term U.S. congressional elections - mean guesswork more than conviction will likely dominate the rest of the year.

The author is editor-at-large for finance and markets at Reuters News. Any views expressed here are his own