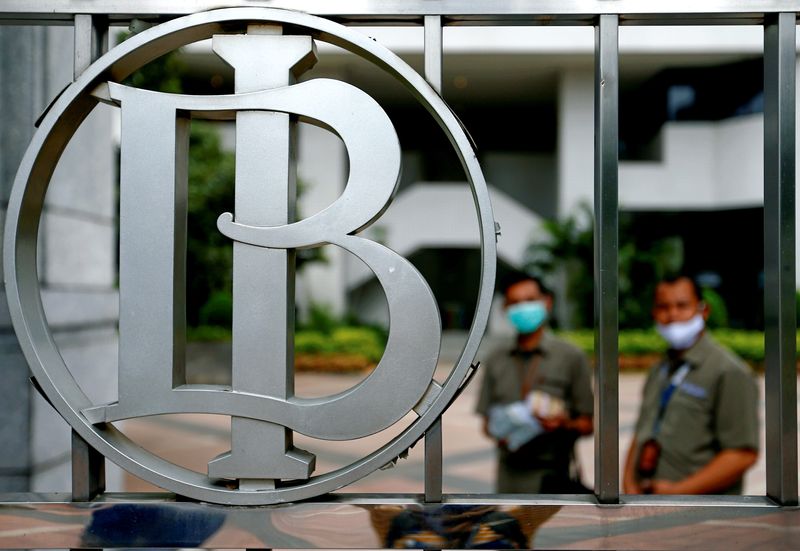 JAKARTA (Reuters) - Indonesia's central bank left its policy interest rate unchanged at a record low on Thursday but said it would lift yields on other short-term debt, taking the money market back towards pre-pandemic normality.

Bank Indonesia (BI) said the current level of its benchmark seven-day reverse repurchase rate, 3.50%, remained consistent with its low forecast for core inflation and the impact of global economic slowdown on the domestic economy.

BI is one of a few major Asian central banks that have not lifted interest rates from pandemic-era levels. Its decision to not to shift them on Thursday was predicted by most analysts polled by Reuters.

"Even though we decided that the BI rate would remain at 3.50%, we are accelerating normalisation or the response of monetary policy," Governor Perry Warjiyo told an online news conference.

BI will raise money-market rates for terms longer than seven days, strengthen currency intervention to control imported inflation and sell some of its large holdings of government bonds, a move that will push bond yields up, Warjiyo said. He described these as pre-emptive and forward looking measures to mitigate inflation risks.

While the seven-day policy rate holds steady, the central bank will use open market operations to raise yields on instruments with two-week to one-year durations, the governor said. Currently, all yields out to one year are close to the policy rate, he noted.

Growth in Southeast Asia's largest economy would be biased towards the lower end of BI's estimate of 4.5% to 5.3%, because slowing global economic growth could drag down exports, while higher inflation would impact private consumption, he said.

Many central banks around the world have been raising interest rates to battle soaring inflation.

The European Central Bank will discuss whether to raise interest rates by a bigger-than-expected 50 basis points later on Thursday, while the U.S. Federal Reserve is expected to announce another hefty rate hike next week.

Analysts have warned BI that keeping rates unchanged will widen differentials with other countries, making Indonesian assets less attractive for foreign investors and putting downward pressure on the rupiah.

Warjiyo said that, fundamentally, the rupiah should be strengthening, because exports were strong and the current account could post a surplus this year, but he noted that global events were pressuring currencies around the world.

ING economist Nicholas Mapa, who had expected a lift in interest rates after other Asian central banks did so last week, said BI "has faced far less pressure, both on the exchange rate and inflation, than its peers."

"Given Indonesia's projection for its current account, the bank could be on hold for just a little longer," he said.

Damhuri Nasution of BNI Securities expected BI to increase its policy rate by 25 bps next month to respond to rising inflation expectations.

During the COVID-19 pandemic, BI slashed the key rate by 150 bps and injected funds into the financial system, including by buying bonds directly from the government. It began unwinding all that with gradually rising reserve requirement ratios beginning in March.