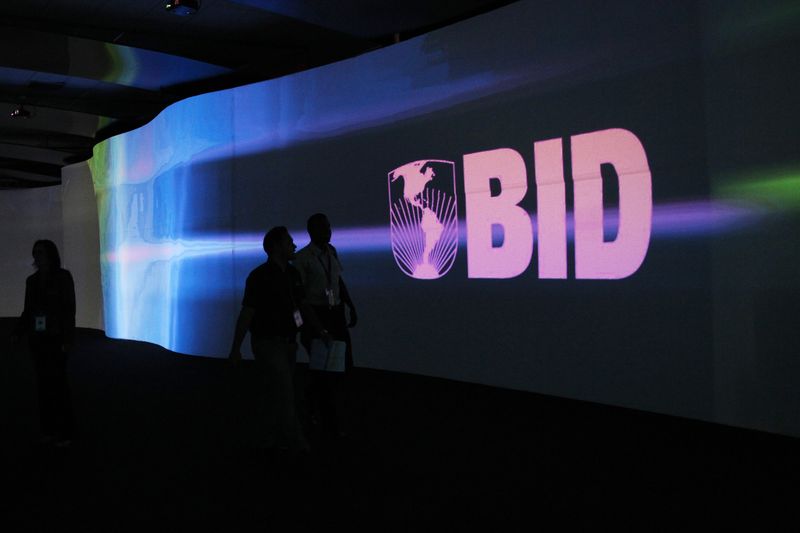 © Reuters. Visitors walk past a screen with the logo of Banco Interamericano de Desarrollo (BID) at the Atlapa Convention Center in Panama City March 13, 2013. REUTERS/Carlos Jasso

WASHINGTON (Reuters) -The Inter-American Development Bank's directors are nearing consensus on the need to remove President Mauricio Claver-Carone after an independent ethics investigation, and could vote as early as Thursday on the matter, a source familiar with the matter told Reuters.

Such a vote, which would require a simple majority of the board of directors, would throw the final decision on Claver-Carone's future to the bank's seniormost body, the board of governors, the source said.

Termination of Claver-Carone, a Trump-era nominee who took office on Oct. 1, 2020, would require a majority of the total voting power of the governing board, according to the bank's rules. The bank's three largest shareholders - the United States, Argentina and Brazil, together hold nearly 53% of the voting power.

The bank's 14 directors are nearing consensus that Claver-Carone should be removed on the basis of the findings of an investigation by legal firm Davis Polk into allegations that he had an intimate relationship with a subordinate, and his "immense" lack of cooperation with the probe, the source said.

The Cuban-American president's subsequent actions, including the demotion of a senior official without board approval and his criticism on the bank's website of how it handled the probe, had contributed to a "toxic" situation, the source added.

Brazil, a major shareholder in the bank that had supported Claver-Carone's election, now favored taking action against him, said the source, who declined to speak publicly since the matter is still under review.

It was not immediately clear how Argentina and the United States would vote. Washington has said it was closely reviewing the report filed by Davis Polk.

"There is emerging consensus that he needs to be removed," said the source, citing concern about Claver-Carone's lack of cooperation, and his move on Friday to demote an Argentine official who had served as vice president for finance.

Reuters, citing multiple sources, reported on Tuesday that the legal firm found evidence that Claver-Carone had engaged in an intimate relationship with a staffer, and described multiple ways in which he and the staffer failed to cooperate with the probe, a further violation of the bank's rules.

The board of directors met for a third day about the matter on Wednesday, joined by representatives from all 48 member countries. It was expected to meet again Thursday, possibly with Claver-Carone in attendance.

A spokesperson for Claver-Carone was not immediately available for comment.

Claver-Carone and the staffer have both denied the allegations in general terms.

On Tuesday, Claver-Carone took aim at the bank for its handling of the investigation, and said its results did not "substantiate the false and anonymous allegations" that triggered the probe. He posted his statement on the bank's website, a move described by two sources as highly unusual.

The Washington-based IDB is a development bank that, while far smaller than the International Monetary Fund or World Bank, is a major provider of development funding in Latin America.

The report by the legal firm found that Claver-Carone refused to surrender his bank-issued mobile phone for analysis, or to provide any text messages between him and the staff on his personal phone, the source said. He also declined to share e-mails sent from his Gmail account to the staffer in question.

It concluded that the lack of cooperation was relevant to the allegations in the complaint and was itself an independent violation of the bank's principles and policies, the source added.