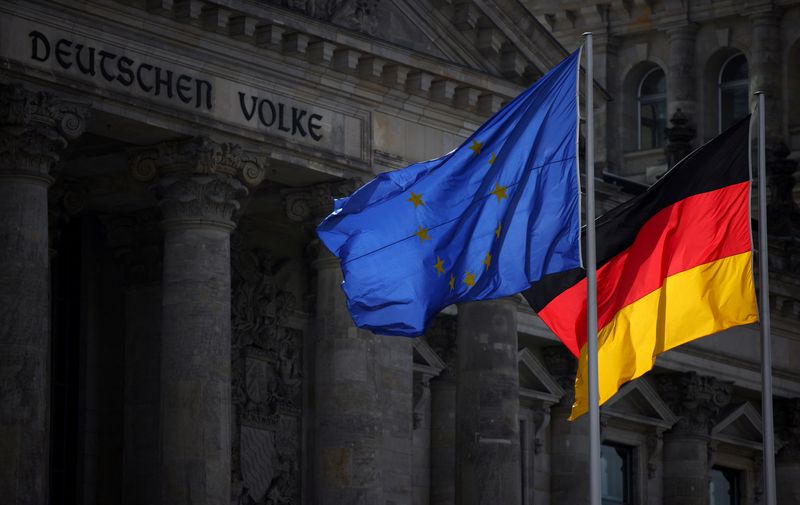 © Reuters. FILE PHOTO: The flags of EU and Germany fly in front of Reichstag building, the seat of the lower house of the German parliament Bundestag, in Berlin, Germany, April 5, 2022. REUTERS/Lisi Niesner/File Photo

The rules must be more clearly defined instead of setting unattainable goals that are open to interpretation, a government source said in Berlin.

The goal is to reduce the deficits that rose sharply during the coronavirus pandemic, while also building buffers to protect against future crises, the source said, adding: "Debt cannot be the solution to all problems".

The German government aims to take a leading role in discussions on reforming the 27-member bloc's debt rules, pointing to recommendations by the International Monetary Fund, the OECD and the European Commission to rein in spending.

The existing EU rules limit new debt to 3% of economic output and total debt to 60%, but these remain suspended because of the pandemic.

Finance Minister Christian Lindner has said EU member states should in principle keep their annual structural deficit below 0.5% of economic output or at least move towards that target.

"My proposal ... aims to make these medium-term budget targets binding," he said in comments to the Handelsblatt newspaper published on Thursday.

A document seen by Reuters that summarises Berlin's proposals also outlined the importance of continued investment for growth and climate goals, but said this made it all the more necessary to improve the state of public finances.