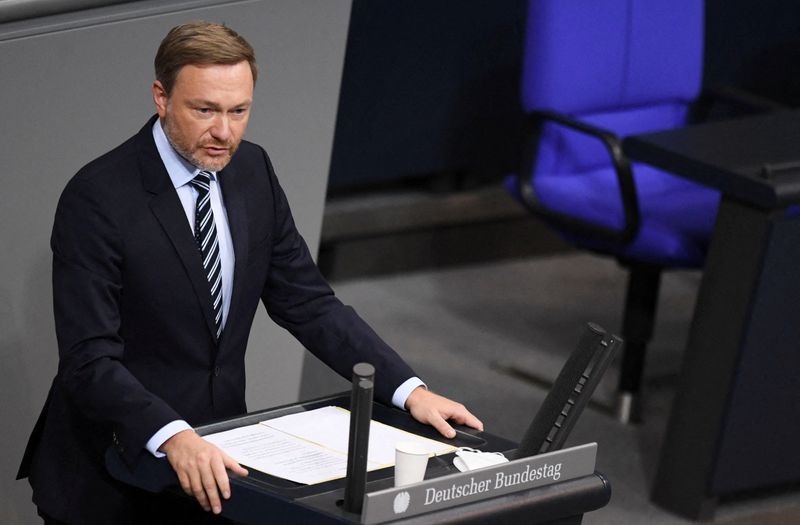 BERLIN (Reuters) - The new German government will offer tax relief to individuals and companies worth at least 30 billion euros ($34.1 billion) in this legislative period, Finance Minister Christian Lindner was quoted as saying on Sunday.

"We will relieve people and small and medium-sized businesses by significantly more than 30 billion euros," Lindner told the Bild am Sonntag newspaper.

Noting that the 2022 budget was put together by the previous government under Chancellor Angela Merkel, Lindner said his draft for 2023 will include relief such as on pension insurance contributions, and the end of an electricity price surcharge.

Meanwhile, Lindner, leader of the fiscally cautious Free Democrats (FDP), said he had asked his cabinet colleagues to review the spending projects of their ministries.

"We have to go back to sound public finances. We have a responsibility towards the younger generation," he said.

Lindner said one way to make savings would be to scrap the construction of a new government terminal at Berlin's BER airport, set to cost 50 million euros. He suggested a temporary building could be used permanently.

The minister is also planning a tax bill to help businesses cope with the ongoing coronavirus pandemic, including allowing them to offset losses in 2022 and 2023 against profits from previous years.

Due to the pandemic, Chancellor Olaf Scholz's ruling coalition agreed to use an emergency clause in the constitution for a third year in a row in 2022 to suspend debt limits and enable new borrowing of 100 billion euros.

From 2023 onwards, the coalition aims to return to the debt brake rule in the constitution that limits new borrowing to a tiny fraction of economic output.