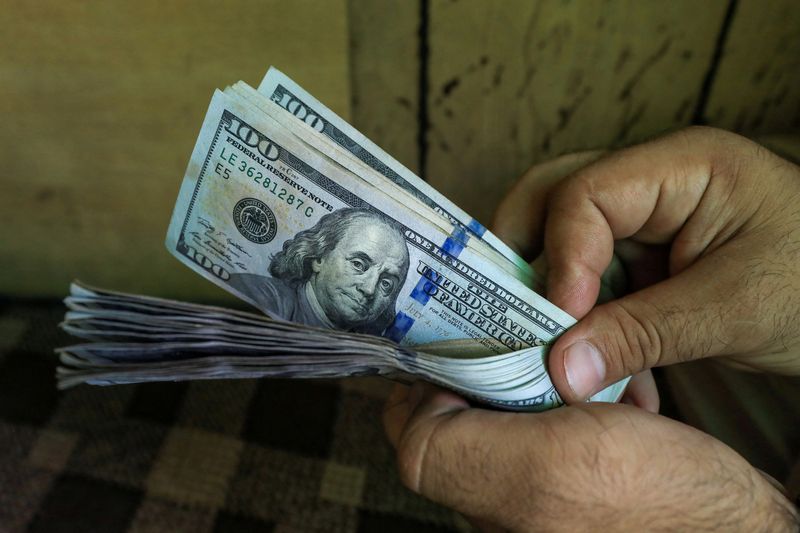 BENGALURU (Reuters) - The dollar's strength has yet to peak, according to a majority of currency strategists polled by Reuters who were however divided on when the currency's advance would come to an end.

The greenback slipped from a decade high in mid-July but quickly snapped back when three Fed officials made it clear the central bank was "completely united" on increasing rates to a level that would put a dent in the highest U.S. inflation since the 1980s.

With the Fed expected to stay ahead of its peers in the tightening cycle by some measure, and the global economy expected to slow significantly, a path for the dollar to weaken meaningfully or for most other currencies to stage a comeback is difficult to forge.

In the Aug. 1-3 poll, a strong majority of more than 70% of strategists, or 40 of 56, who answered an additional question said the dollar's strength hasn't yet peaked.

"For the USD to weaken, the Fed has to be more concerned about growth than about inflation, and we are not there yet," said Michalis Rousakis, G10 FX strategist at Bank of America (NYSE:BAC) Securities.

The dollar - already up around 11% in 2022 - was expected to give up some of its gains over the coming 12 months. But few of the major currencies were forecast to regain all of their year-to-date losses over that period.

"In the very long run, let's say two or three or four years from now, the dollar will probably be considerably weaker. But in the 12-month timeframe we're looking at relatively small moves," said Brian Rose, senior economist at UBS Global Wealth Management.

The euro touched parity with the dollar last month, hitting a near two-decade low, and is down more than 10% in 2022. It was forecast to gain over 6% from current levels by next July and was expected to trade around $1.02, $1.05 and $1.08 in the next three, six and 12 months respectively.

Those median forecasts, the lowest in a Reuters FX poll since 2017, showed a deteriorating outlook for the common currency.

While only a handful of analysts expected the euro to trade at or below parity versus the dollar over the forecast horizon in a July poll, about one-third of the over 60 strategists now forecast it to revisit those levels in the next three months.

"In the short term we're looking for the dollar to maintain its strength, especially against the euro. So we think there's a chance the euro will drop below parity," Rose said.

Despite its recent rally when U.S. Treasury yields tumbled, the safe-haven Japanese yen is down about 14% for the year, making it the biggest loser among its major peers.

The carry trade currency was expected to claw back some of those losses and gain about 5% to trade around 127 per dollar in a year.

"I think the most relevant question with respect to the dollar is if you're going to sell the dollar, what else do you buy ... you're not going to buy shed loads of yen relative to the U.S. dollar when you're getting much higher yield in dollars," said Jane Foley, head of FX strategy at Rabobank.

The yield advantage which dollar assets carry was also likely to hurt emerging market currencies, offering no respite to an already battered bunch.

While China's tightly-controlled yuan and the Korean won were predicted to be range-bound over the next three to six months, the Indian rupee, South African rand, Russian rouble and Turkey's lira were expected to fall.

Phoenix Kalen, head of emerging markets research at Societe Generale (OTC:SCGLY), gave a laundry list of worries for those currencies.

"For EM FX, we are less heartened by the pull-back in the market's pricing of FOMC rate hikes, and more focused on the underlying context of deteriorating global growth, tightening financial conditions, worsening geopolitics, continuing EM portfolio outflows, still-elevated inflation, and the potential for downside China surprises," Kalen said.

(For other stories from the August Reuters foreign exchange poll:)