Factbox: How PBOC might respond to China's weakening yuan 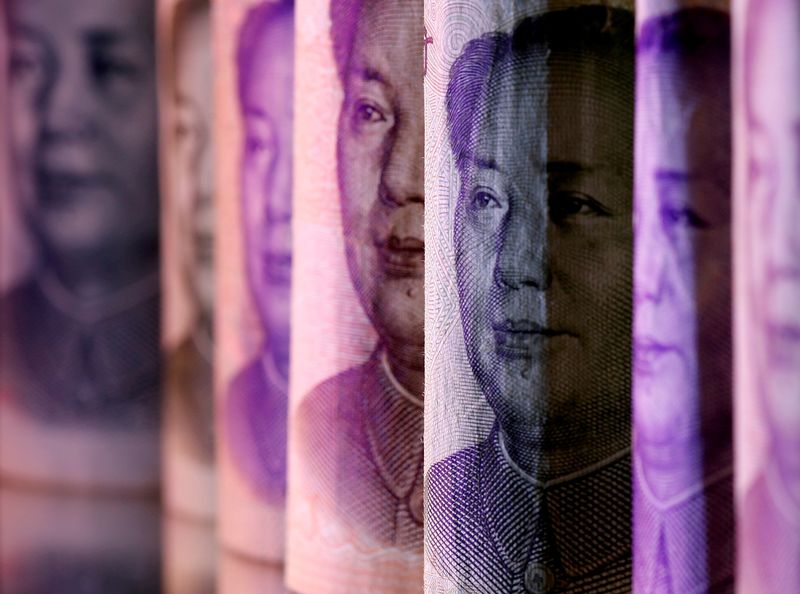 (Reuters) - The yuan's 5% fall against the dollar in the last three weeks has raised speculation over when and how the People's Bank of China (PBOC) might act to slow its depreciation.

Even against a basket of major trading partners' currencies, the yuan has lost 3.6%.

The main factors behind the portfolio outflows from China are rising U.S. interest rates, the war in Ukraine, and a slowing domestic economy due to lockdowns in Chinese cities battling outbreaks of COVID-19.

While most market participants expect the yuan's weakness to persist for the time being, some expect the central bank to at least slow the pace of its decline.

So far, the only sign that the PBOC might be uncomfortable with the yuan's recent decline came in late April, when it reduced the amount of foreign exchange that banks must hold in reserve.

Following is a list of policy moves and measures employed by the PBOC to curb excess yuan volatility over the past few years:

The PBOC first added the counter-cyclical factor to its formula for fixing the daily midpoint for the yuan-dollar exchange rate back in 2017.

The central bank never disclosed how it calculated the counter-cyclical factor, but regulators described it as a way to better reflect fundamental supply and demand and lessen the effects of herd mentality in the currency market.

It was suspended in late 2020 when the yuan strengthened as a result of higher foreign capital inflows and improving economic fundamentals.

The onshore spot yuan can trade in a 2% range around the midpoint set by the PBOC in the daily fix.

Currency traders regard any significant discrepancy between market projections of what the fix might be and where the PBOC actually sets the midpoint as an indication of which way the central bank wants to tug the market.

Senior officials from the central bank and FX regulator have used public speeches and commentaries in state-owned media to send messages to the currency market, usually reiterating a pledge to keep the yuan basically stable.

In 2018, Pan Gongsheng, a vice governor at the PBOC warned speculators against shorting the yuan, reminding them of country's healthy economic fundamentals and ample foreign exchange reserves.

In 2018, the PBOC made it more expensive for financial institutions to short the yuan in derivatives markets, by raising their foreign exchange risk reserve ratio to 20% from zero.

While the amounts were small, analysts said the move sent a clear message guiding expectations for the yuan exchange rate.

During previous phases of yuan weakness, China's major state-owned banks have been spotted selling dollars and, although they have their own orders to execute, it was assumed they were probably acting at the behest of the PBOC, bankers told Reuters.

State banks were also seen swapping yuan for dollars in forwards and immediately selling them into the spot market to prop up the Chinese currency during 2018 to 2019.