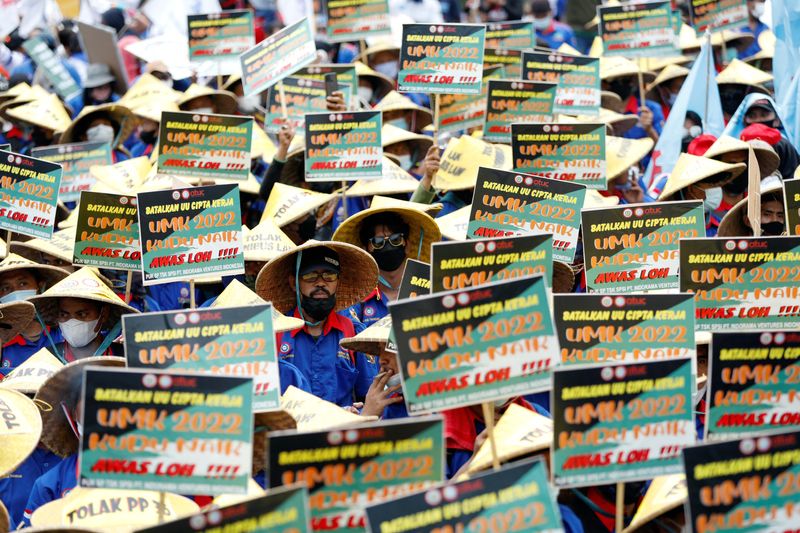 © Reuters. FILE PHOTO: Members of Indonesian trade unions hold placards during a protest against the government's labor reforms, as Indonesia's Constitutional Court reads the verdict on a judicial review filed on the controversial 'omnibus' or job creation law in Ja

JAKARTA (Reuters) - Indonesia's parliament is set to revisit a contentious Job Creation law to comply with a court order to fix procedural flaws during its 2020 passage, amid renewed pressure from unions and environmentalists to overturn the legislation.

WHAT IS THE JOB CREATION LAW?

It has extensive reach, covering topics ranging from labour rights, tax rules and permits for mining and plantation business to the formation of Indonesia's sovereign wealth fund.

WHY IS IT CONTROVERSIAL?

Labour organisations, student groups and environmentalists have complained that the law was too pro-business and that it weakened protection for workers and the environment.

Labour reforms brought about by the law includes a cut in mandatory severance benefits, new minimum wage limits and removal of some mandatory paid leave.

Green groups complained the law requires only investments considered high-risk to conduct an environmental impact study, instead of a wider requirement under previous laws.

Some critics have also accused the government of racing through the debate process without holding proper public consultations.The government had argued previous labour rules were too stringent and discouraged foreign investment, and said environmental protection was not being forfeited.

HOW WAS THE LAW CHALLENGED?

Workers and students held mass protests across the archipelago in October 2020 after the law's passage, which led to trade unions and civil society groups filing a judicial review at the Constitutional Court.

The court took about a year to hear the case and in November 2021 ruled the handling of the legislation was procedurally flawed and in some parts, unconstitutional, including changes made after parliamentary approval.

The court, whose ruling cannot be challenged, ordered the government and parliament to make changes within two years or the legislation will be deemed "permanently unconstitutional".

WHAT HAS HAPPENED SINCE THEN?

Lawmakers last month revised a law that governs how legislation is passed. The revision includes specifying what counts as public consultations and a new legal basis for "omnibus"-style bill, allowing a bill to change many laws covering sometimes unrelated topics.

That revision was widely seen as designed to help the government to comply with the court ruling and critics, including unions and green groups, saw it as intent by lawmakers to again hasten the debate process.

Workers are planning to protest on June 15 at parliament and demand labour rules revert back to the 2003 labour law, a union official told Reuters.

Greenpeace campaigner Asep Komarudin said he hoped lawmakers would scrap parts of the law that could be detrimental to the environment.

It is unclear whether the government will consider more significant changes to the law given its importance to foreign investors. A senior lawmaker told Reuters the renewed debate will be thorough in combing through the law's content.