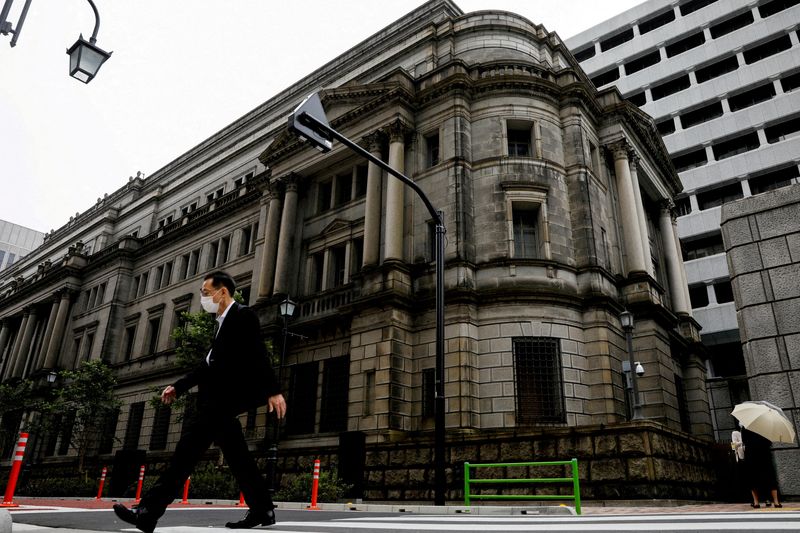 © Reuters. FILE PHOTO: A man wearing a protective mask walks past the headquarters of Bank of Japan in Tokyo, Japan, May 22, 2020. REUTERS/Kim Kyung-Hoon/File Photo

TOKYO (Reuters) - The Bank of Japan's yield curve control (YCC) is under fierce market attack, as investors test the bank's commitment to capping bond yields with inflation above the BOJ's target.

The BOJ's ultra-easy policy targets some short-term interest rates at -0.1% and the 10-year government bond yield at 0.5% above or below zero, in an effort to sustainably achieve 2% inflation.

Here is how Japan's YCC works and its potential pitfalls.

Although the market is testing the upside of the BOJ's bond yield target now, when the bank adopted YCC in 2016, it was trying to stop interest rates from falling too low.

After years of huge bond buying failed to fire up inflation, the BOJ cut short-term rates below zero in January 2016 to fend off an unwelcome yen rise. The move crushed yields across the curve, outraging financial institutions that saw returns on investment evaporate.

To pull long-term rates back up, the BOJ adopted YCC eight months later by adding a 0% target for 10-year bond yields to its -0.1% short-term rate target.

The idea was to control the shape of the yield curve to suppress short- to medium-term rates - which affect corporate borrowers - without depressing super-long yields too much and reducing returns for pension funds and life insurers.

HOW DOES IT WORK?

The BOJ chose a rate regime because it was reaching the limit of quantitative easing, where it bought targeted amounts of bonds to push down yields, hoping to stoke inflation and economic activity.

When the central bank had gobbled up half the bond market, it was hard to commit to buying at a set pace. YCC allowed the BOJ to buy only as much as needed to achieve its 0% yield target.

The bank has tapered bond buying in times of market calm to lay the groundwork for an eventual end to ultra-easy policy.

WHY THE TARGET BAND?

To address such side-effects, the BOJ said in July 2018 the 10-year yield could move 0.1% above or below zero. In March 2021, the bank widened the band to 0.25% either direction to breathe life back into a market its buying had paralysed.

Under attack from investors betting on a rate hike, the BOJ doubled the band in December to 0.5% above or below zero and ramped up bond buying to defend the ceiling.

Investors broke the 0.5% cap on Friday, spurring expectations the BOJ would have to take more drastic steps.

YCC worked well when inflation was low and prospects for hitting the BOJ's price target were slim, as investors could sit on a pile of government debt that ensured safe returns.

But with inflation eroding those gains, investors have sold bonds, pricing in the chance of a near-term rate hike.

The BOJ has ramped up buying, including through offers to buy unlimited amounts of bonds, to defend its yield cap. That has been criticised by analysts as distorting market pricing and fuelling an unwelcome yen plunge that inflated the cost of raw material imports.

Haunted by a history of political heat for dialling back stimulus prematurely, the BOJ wants to avoid raising rates until it is clear inflation will sustainably hit the bank's 2% target, backed by higher wage growth.

But markets may force the BOJ to relent, breaching the 10-year yield cap on Friday - before massive BOJ bond buying brought the rate back down. Investors may continue shorting Japanese government bonds this week in anticipation of a near-term rate hike.

If the market attack continues, the BOJ may further widen the band around its yield target or take bolder steps such as raising or abandoning the long-term rate target altogether, some analysts say.