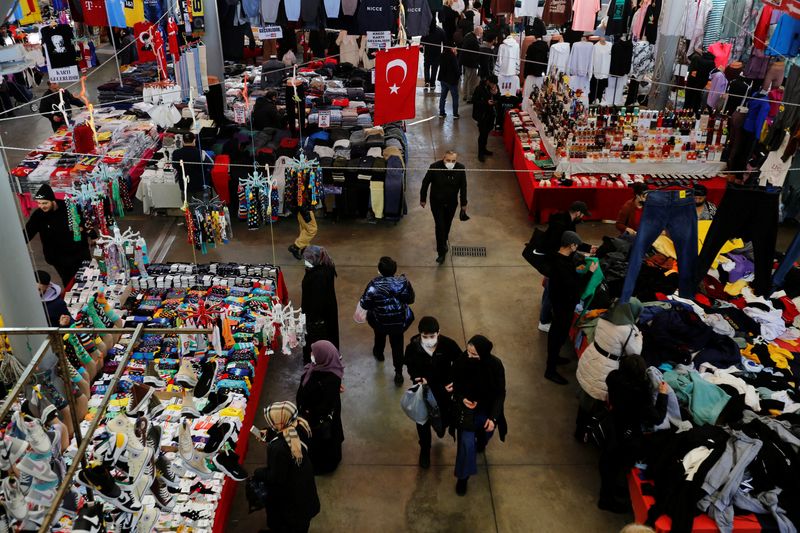 By Ebru Tuncay and Orhan Coskun

ISTANBUL (Reuters) - Turkey's scheme to protect lira deposits from depreciation has attracted more than 90 billion lira ($6.6 billion) of savings, but little of that has come, as intended, from the conversion of foreign currency, banking sources said on Thursday.

A senior official from President Tayyip Erdogan's AK Party told Reuters the scheme had so far failed to meet expectations fully and Ankara was working on more steps to boost the currency's attractiveness as it slides against the dollar.

Erdogan unveiled the deposit scheme (KKM), intended to arrest a currency crisis, on Dec. 20 after the lira slumped to a record low of 18.4 to the dollar, offering to compensate savers for losses incurred due to depreciation during the deposit term.

The lira rebounded after the move but still ended the year 44% weaker versus the dollar. It dipped 5% more this week after inflation surged to a 19-year high of 36.1%, deepening negative real yields against a policy rate of 14%.

Banking sources and officials familiar with the subject said the vast majority of the funds placed in the new deposit accounts had come from other lira accounts, with very little being converted and transferred from hard currency accounts.

"Separately, the weakening of the lira is continuing. In this environment, people prefer to stay holding foreign currencies," the source said.

Finance Minister Nureddin Nebati said earlier this week that the volume of forex-protected deposits under the scheme had risen to 91.5 billion lira, but did not say how much of this was converted from forex.

According to the BDDK banking watchdog, deposits in the banking system were 5.3 trillion lira ($388 billion) at the end of 2021, with some 65% of this in foreign currency deposits.

Some $50 billion of forex deposits was expected to be drawn into the new lira accounts in the scheme's first months, said a Hurriyet newspaper column based on presidential sources published after the scheme was announced.

Another banking source said: "There are considerable moves from lira (accounts), but there is relatively little from foreign currency ones."

A senior AKP official said participation in the scheme was quite high and increasing each day "but the expectations have not been completely met".

"At the moment, fundamentally it is those holding lira benefitting from the KKM accounts, but the number and volume of those who have converted forex and returned to lira is rather low."

"Work is being carried out on long-term instruments to increase trust in the lira and draw in investment."