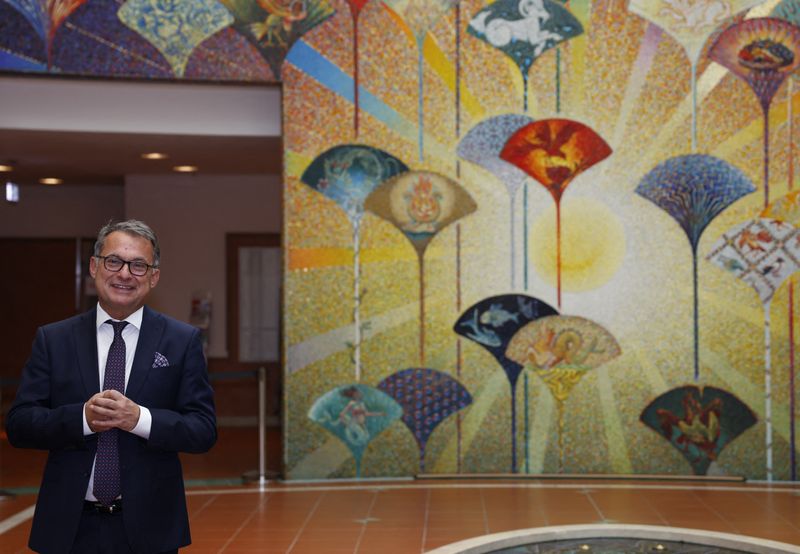 © Reuters. Joachim Nagel, President of Germany's federal reserve Bundesbank poses for a picture during a media tour at the Bundesbank headquarters in Frankfurt September 16, 2022. REUTERS/Heiko Becker

FRANKFURT (Reuters) - Bundesbank President Joachim Nagel opened the door on Tuesday to smaller interest rate increases by the European Central Bank but said there was still a long way to go in raising borrowing costs.

With euro zone inflation running in double digits, the ECB has been raising rates in record 75 basis-point steps but a number of policymakers have called for smaller hikes from December.

Nagel, among the ECB's hawks who generally favour higher rates, told reporters a 50-basis-point increase would also count as "strong" but added rates were still so low as to stimulate the economy and "relatively far" from restricting it.

"Even 50 basis points is a strong rate move," Nagel said.

"I didn't participate in this 75-or-50 discussion because I didn't think that was really helpful."

The ECB has raised its rate on bank deposits from minus 0.5% to 1.5% in three months and says it wants to at least bring it back to neutral, where it doesn't support or curb activity.

This is an elusive level that many economists currently put at around 2%.

Nagel backed using market prices, rather than economic models, given the current, uncertain prospects and said he expected inflation rates to plateau in the coming months and stay above the ECB's 2% inflation goal next year and the following one.

"Regardless of how the numbers come in, I think the inflation picture will continue to be strong for 2023, Nagel said in his conversation with reporters in Frankfurt. "And possibly even in 2024, we still won't be where we actually want to be, which is back near 2%."

He added that Germany was likely to experience a mild recession next year and that he didn't expect the Bundesbank to need a taxpayer bailout as a result of the large interest payments it has to make and on the losses on the bonds it bought on the ECB's behalf.

He reaffirmed his call to start shrinking the ECB's bond holdings early next year.