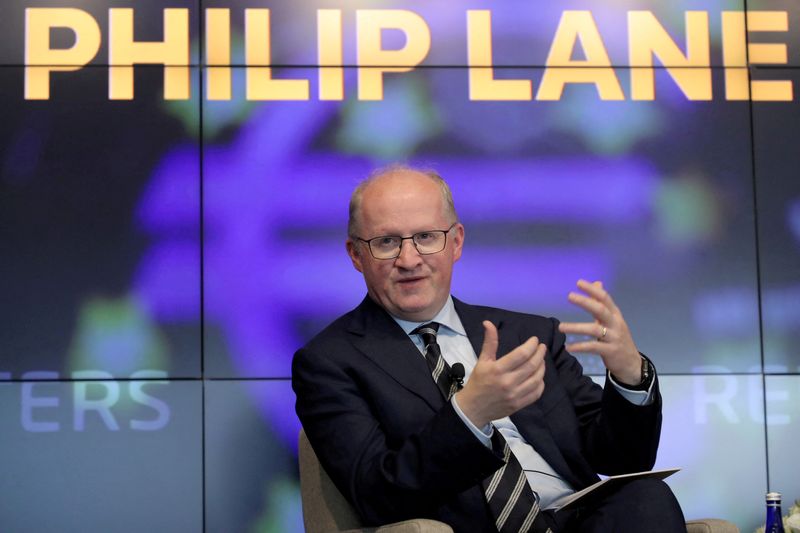 FRANKFURT (Reuters) -The European Central Bank is preparing for a sequence of rate hikes that will put its benchmark rate in positive territory, but the path it takes is more important than the exact date of the first move, ECB chief economist Philip Lane said on Thursday.

With inflation soaring to a record high 7.5% last month, policymakers have advocated a quicker exit from stimulus and several, including board member Isabel Schnabel, have made the case for a move as soon as July.

"I think it’s clear that at some point we’re going to be moving rates, not just once, but over time, in a sequence," Lane told the Bruegel think tank. "When exactly will that start?... It should not be seen as the most important issue."

Lane argued that the overall path of policy normalisation is more relevant as is the definition of the neutral rate, a level where the bank is neither stimulating nor holding back the economy.

"Minus 0.5% (deposit rate) is not in line with the 2% inflation target," Lane said. "If we believe that inflation is going to be stable around 2%, minus 0.5 is not consistent, zero is not consistent. We know normalisation will be more than that."

But he also made the case for gradual moves, especially since wage growth, a necessary condition for durable inflation, is still relatively muted, pointing to inflation settling at around the ECB's 2% target, instead of overshooting it.

The latest wage deals in the euro zone show employers and unions believe the current spike in inflation will prove temporary, Lane added.

"The front-loaded nature of recent wage settlements (with 2022 increases larger than 2023 increases) suggests that wage-setters understand that there is a temporary component to the currently high inflation rate," Lane said.