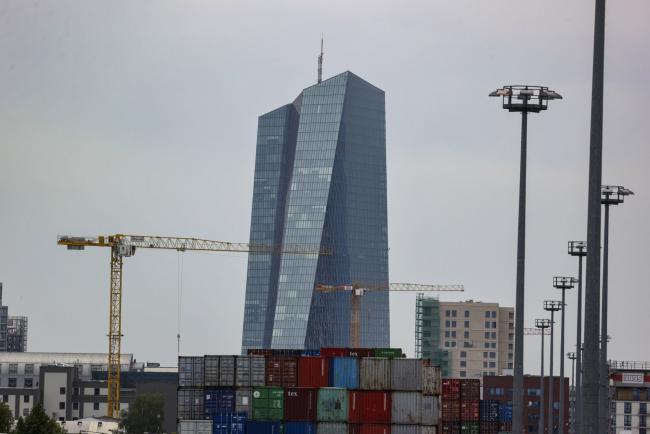 © Bloomberg. The European Central Bank (ECB) headquarters beyond containers at the Deutsche Bahn AG freight terminal in Frankfurt, Germany, on Monday, May 23, 2022. While ECB policy makers have increasingly coalesced around the prospect of a first hike at their July 21 meeting in recent weeks, they have barely mentioned the possibility of a more aggressive half-point move such as the US Federal Reserve delivered this month.

(Bloomberg) -- Bond-buying under any new anti-crisis tool from the European Central Bank would probably involve selling other securities so purchases don’t upset efforts to curb record inflation, according to people familiar with the matter.

Policy makers are determined to neutralize any interventions in debt markets so they don’t exacerbate upward price pressures, said the people, who asked not to be identified because the discussions are private.

Officials want work on the new instrument -- which will continue for some time and may see the design shift -- to conclude in time for their July 20-21 policy meeting, when interest rates are set to be raised by a quarter-point, they said.

Countries that benefit from if would have to meet certain conditions to avoid concerns the ECB is financing governments outright.

An emergency meeting Wednesday of the ECB’s Governing Council sped up work on the new instrument after a selloff in Italian government debt stirred memories of Europe’s sovereign-debt crisis. While the renewed push to tackle so-called fragmentation calmed markets somewhat, it’s fueled expectations of a concrete announcement in the coming weeks.

The ECB also reiterated that it will use reinvestments of maturing debt from its pandemic-era asset-purchase program, known as PEPP, more flexibly.

The ECB estimates that about 17 billion euros ($17.7 billion) of bonds expire each month -- 12 billion euros of which are in core countries, the people said. Redirecting that money to struggling markets creates a defense that may ease stress for now, they said.