Dollar eyes longest losing streak in a year, stocks up ahead of U.S. inflation data 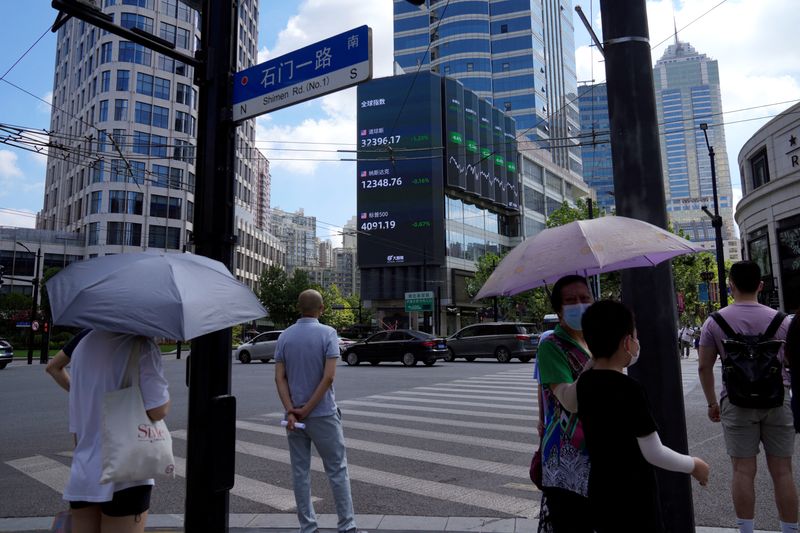 LONDON (Reuters) - The dollar was heading for its longest losing streak in a year and world stocks were higher for a fifth straight day on Tuesday, ahead of U.S. inflation data expected to show the furious surge in prices may finally be cresting.

On Tuesday morning, traders were already digesting German business confidence data that showed ongoing recession angst. But the day's main event will be U.S. inflation figures due at 1230 GMT, data that will feed into next week's Federal Reserve meeting.

Economists expect a slight decline in the headline inflation number to around 8% year-on-year, while the core rate, which strips out the more volatile elements, is forecast to see the same 0.3% month-on-month rise as in July.

"I would concentrate on the core month-on-month number for a surprise either higher or lower," Saxo bank's head of FX strategy, John Hardy, said, adding that Tuesday could be a key day for the dollar, following its recent mini slump.

"Everyone is priced for 75 basis points (as a rise in U.S. interest rates next week), so it is more about if this is peak Fed, and what happens into year-end and next year."

A hefty drop in commodity prices over the past couple of months has helped cool some of the inflation worries that have forced major central banks to hike interest rates sharply this year.

European gas prices were down another 4.5% at 181.80 euro per megawatt hour < TRNLTTFMc1> on Tuesday, taking their drop since late last month to 47%.

Brent crude was up around 1%, on course for its fourth day of gains. But at $94 a barrel, it is down 25% since mid June and nearly a third from the $139 a barrel it peaked at shortly after Russia invaded Ukraine. [O/R]

Interest rate futures imply a 90% chance that the Federal Reserve will lift its benchmark interest rate by 75 basis points at next week's policy meeting - a position that is perhaps most vulnerable to a downside CPI surprise.

"A further cooling in inflation would support the case for a step down in the pace of policy tightening to a 50 basis points rate hike at the FOMC meeting next week," said Kristina Clifton, a senior economist at CBA.

Are we nearly there yet? https://graphics.reuters.com/GLOBAL-INFLATION/gdvzyxnbopw/chart.png

Wall Street indexes were pointing to a fifth straight day of gains for the main S&P 500, Dow Jones Industrial and Nasdaq markets later.

MSCI's broadest index of Asia-Pacific shares ex-Japan overnight continued its bounceback from two-year lows. It rose 0.7%, led by a 2.7% jump for South Korea's KOSPI, while Japan's Nikkei put on 0.25%. [.KS][.T]

Data there, though, was mixed. A 9% year-on-year jump in Japanese wholesale prices points to pressure on corporate margins, yet a slowdown in gains for August holds out some hope of relief.

China's president, Xi Jinping, was preparing for a meeting with Russian President Vladimir Putin later in the week, while, in New Zealand, rate hikes that began a year ago were starting to bite, as August home prices showed a 6% drop from a year before.

Back in the currency markets, the dollar index, which gauges the greenback against six major peers, was down 0.2% in Europe at 108.101.

Tailwinds from last week's European Central Bank rate hike and the drop in gas prices helped the euro extend its bounce. It was above parity at $1.0142. [FRX/]

Even the battered Japanese yen got a breather at 142.34 per dollar. That was up from last week's 24-year low of 144.99 amid signs that some investors were now closing bets on a further slide in the currency.

U.S. Treasury yields steadied after some lacklustre auctions. Selling was heaviest at the very long end on Monday, with the 30-year yield up about 6 bps to around 3.5%.

Before U.S. inflation data is issued later today, supply will be the main driver for markets, said Antoine Bouvet, senior rates strategist at ING in London.

"There is a lot (of supply) to absorb and investors are understandably nervous about buying more bonds after a hawkish ECB meeting and more generally due elevated rates volatility," Bouvet added.