Column-Is Brazil another BRIC in the wall? :Mike Dolan 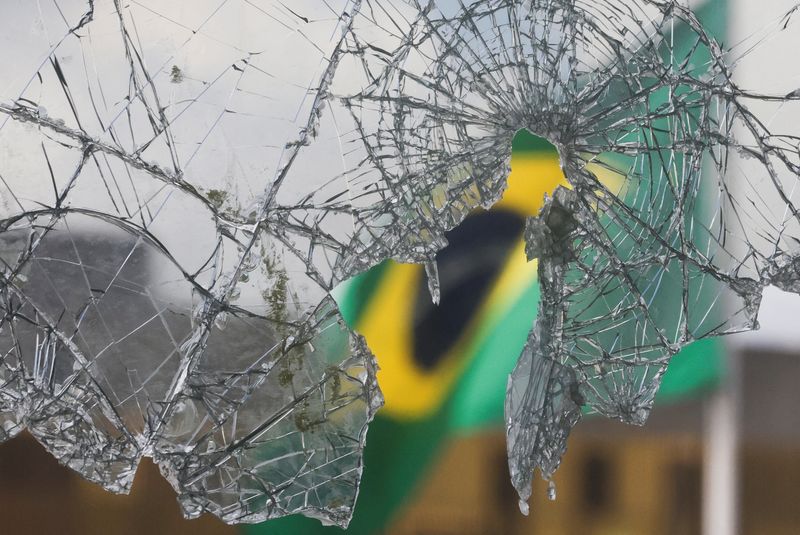 LONDON (Reuters) - Almost as surprising as the weekend's shock events in Brasilia was how little world markets appeared to react - showing investors may already be braced for an era of more volatile geopolitics after 2022's tensions over Russia and China.

And yet just a year after most markets dismissed the chances of a full-scale Russian invasion of Ukraine, despite Moscow massing troops on the border for several weeks and despite the severity of the subsequent economic fallout around the world, it is still odd to see another significant political tail risk almost ignored.

To be sure, some downplay the events as a shock per se. Many voices in Brazil reckon Sunday's storming of the presidential palace, Congress and Supreme Court by thousands of supporters of former far-right President Jair Bolsonaro was no real surprise at all - and it merely underlined the country's deep divisions.

Bolsonaro, seen an acolyte of ex-U.S. President Donald Trump, has yet to concede defeat in October's elections and has made false claims that Brazil's electronic voting system was prone to fraud, spawning a violent movement of election deniers.

Lula appears to have restored order to the capital amid thousands of arrests. And critically, for a country that ended two decades of military rules only as recently as 1985, the army has so far not reacted to protester demands for a coup.

Investors quizzed for their initial reaction appeared to see the whole event as a one-off and preferred to stay focussed on Lula's economic plans and spending pledges instead. The real and stock market barely flinched on Monday, with spreads on Brazil's sovereign dollar bonds steady to date also.

Credit firm Moody's (NYSE:MCO) said it did not see Sunday's riots affecting the country's Ba2 long-term sovereign rating by themselves. While negative credit implications could arise if violent acts persist and lead to economic disruptions, it added that it saw the probability of that happening as small.

It did not address wider institutional concerns about the resilience of Brazilian democracy or risk of military rule and how allied Western democracies, who widely condemned the weekend riots, may be forced to react to such an extreme outcome in terms of sanctions.

So perhaps it was just another volatile day in edgy Brazilian politics and everyone's seen it all before.

Graphic: Brazil stocks outperform over the past year https://fingfx.thomsonreuters.com/gfx/mkt/lgpdklkadvo/Two.PNG

Graphic: Brazil's real vs other BRICs and G4 https://fingfx.thomsonreuters.com/gfx/mkt/myvmogoqkvr/Three.PNG

Yet Brazil's assets do not, on the face of it, look like beaten-down bargains that have priced all the worst-case scenarios. Buoyed by commodity price windfalls that followed the Ukraine invasion last year, the real and Brazil's leading stocks outperformed most other major economies over the past 12 months.

What many banks point to is the assumed risk premium already built in to Brazilian real interest rates.

For one, the central bank was one of the first to start raising interest rates after the pandemic recession and lifted its policy rate by more than 10 percentage points to 13.8% since early 2021. They have remained at that levels since August, right through the election process, and are the highest among the major developing economies even as domestic inflation almost halved last year from the 10% rate seen in 2021.

JPMorgan (NYSE:JPM) strategists said their short-term valuation model put the real's fair valued around 5.15 per dollar - about 4% stronger than where it started the year and leaving its risk premium amounting to a "reasonable" 1.5 standard deviation. It also said data showed foreign positioning in real was near the lows of the past two years.

Goldman Sachs (NYSE:GS) reckoned rising inflation-adjusted interest rates keep the currency attractive and its metrics suggest an "idiosyncratic risk-premium" of almost 20% in the real - leaving room for gains even if markets continue to price some political tail risks.

But beyond Brazilian markets, the wide global markets calm surrounding the weekend events was equally curious.

After all, Brazil is the 12th largest economy in the world and one of the biggest food and raw materials exporters. With global inflation the economic bogeyman of the moment, anything that threatens shortages or another supply shock there may reasonably create waves.

And how might a threat to democracy in Brazil position the country relative to the major Western allies or other autocracies within the long-standing BRIC grouping of giant emerging economies including Russia, India and China?

But maybe investors are already across this.

According to the surge late last year in BlackRock (NYSE:BLK)'s geopolitical risk indicator - which tracks the relative frequency of news and brokerage reports on specific geopolitical risks - investors are paying more attention to these risks than they have for at least five years.

Among the 10 biggest risks it lists by likelihood is emerging markets political risks that threaten political institutions.

Kicking off its conference on the markets outlook for 2023 on Tuesday, Goldman Sachs focussed on geopolitics as the dominant theme.

Goldman adviser and former head of Britain's MI6 intelligence service Alex Younger said the recent past may not be a good guide to how things pan out from here.

"Maybe economics does win out in the end, but at the moment geopolitics is ascendant," he said. "The past 30 years were likely the aberration. Get away from the idea of some mean reversion."

The opinions expressed here are those of the author, a columnist for Reuters.

(By Mike Dolan in London; Editing by Matthew Lewis)