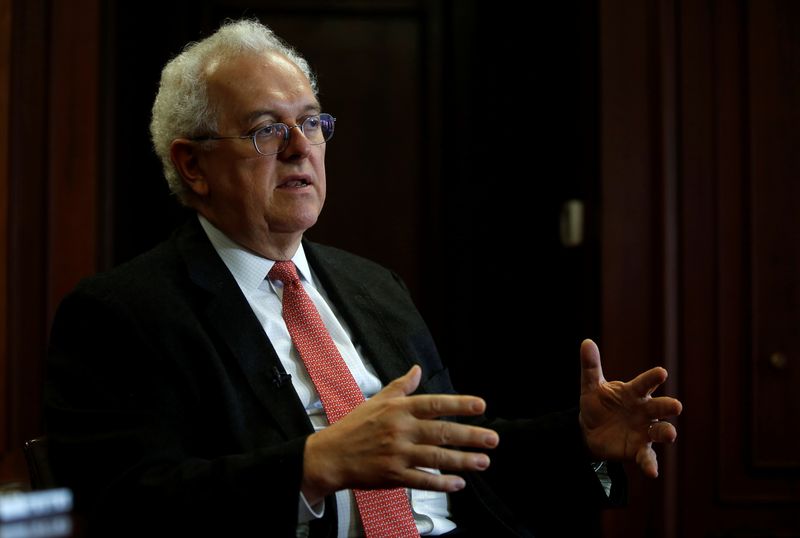 © Reuters. FILE PHOTO: Jose Antonio Ocampo, member of the board of the central bank of Colombia, speaks during an interview with Reuters in Bogota, Colombia August 10, 2017. REUTERS/Jaime Saldarriaga

BOGOTA (Reuters) - Interest rate hikes have a limited capacity to rein in accelerating inflation because supply issues are one of the key drivers of consumer price increases, Colombia's next finance minister, Jose Antonio Ocampo, said on Thursday.

The government of Colombia's next president, the leftist Gustavo Petro, who takes power on Aug. 7, will look to raise subsidies for poor people, Ocampo added.

Colombia's central bank has raised its benchmark interest rate by 575 basis points to 7.5% since the beginning of an upward cycle that started in September in a bid to control inflation. Cumulative 12-month price growth hit 9.67% in June, the highest level in two decades and more than triple the bank's 3% target.

The market majority expects the bank board to raise the rate by 150 basis points to 9% on Friday.

"As the problem is with supply, not demand, supply of high fuel prices, international food prices, of fertilizers, the interest rate's capacity to cut inflation is very low," Ocampo said at a conference in Bogota.

"The downside is that (lower inflation) comes from an economic slowdown," he said.

Ocampo, who as finance minister will hold one of the central bank's seven board seats and will vote on rate movements, raised his concern about further increases.

"I don't believe that we yet have a contractionary monetary policy in Colombia, although we will see tomorrow what the bank board determines for us, where I am more fearful," Ocampo said.

"In the short term all one can do is increase subsidies for poor households ... that's one of the measures to come," he said.