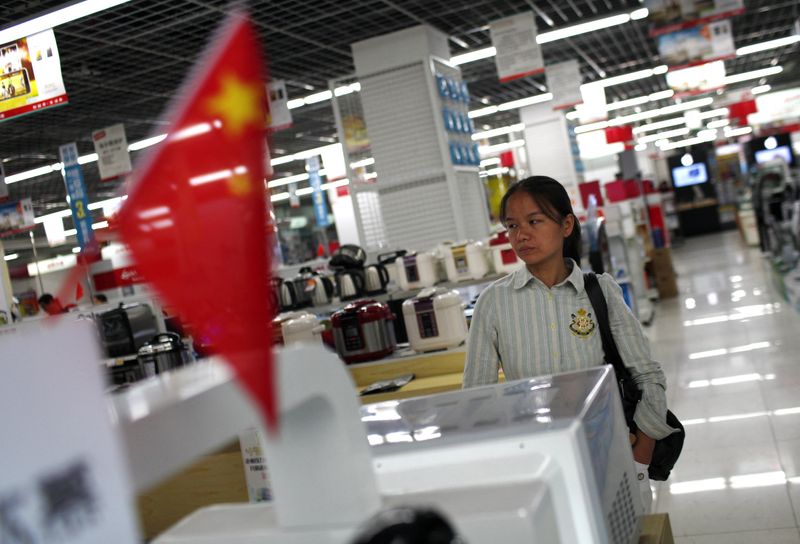 © Reuters. FILE PHOTO: A woman looks at products as she shops at a local electronic store in downtown Shanghai, October 8, 2012. REUTERS/Carlos Barria

BEIJING (Reuters) - China's industry ministry on Monday proposed guidelines that it said it hoped could encourage its consumer goods enterprises to be more innovative with their products, giving examples such as smart rice cookers and robot vacuum cleaners.

The Ministry of Industry and Information Technology (MIIT), said the guidelines were aimed at the country's "light industry", defined as enterprises that make consumer goods and tools, said the sector faced as an insufficient supply of mid-to-high end products and a lack of globally well-known brands.

Examples of products it is encouraging the industry to produce include computer enabled rice cookers, shoes with location functions aimed at children and the elderly and liquor with a lower alcohol content for younger consumers.

It also said that by 2025 it hoped to see an improvement in the prestige of China's brands and its position in the world's manufacturing value chain.

It gave specific suggestions for each product category. "Diversified, trendy, individualised and low-alcohol liquor products should be developed aiming at younger consumers and foreign consumers," it said.

The document is open to public feedback until Jan. 20, it added.