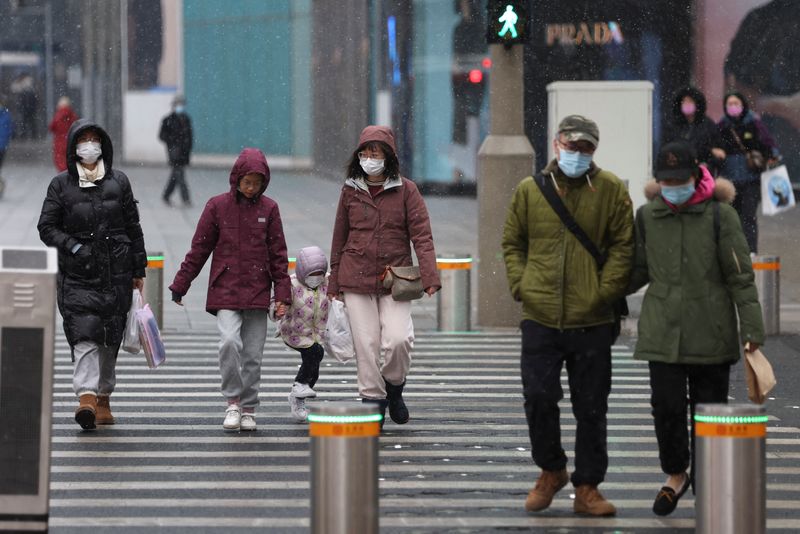 BEIJING (Reuters) -China signalled an easing of its crackdown on the once-freewheeling tech sector on Friday as President Xi Jinping seeks to bolster the economy in the face of growth-sapping COVID-19 lockdowns, sending shares in online heavyweights surging.

China's powerful Politburo, in a meeting chaired by Xi, said it will step up policy support for the world's second-largest economy, including its so-called "platform economy", fueling investor hopes that the worst may be over for an unprecedented, multi-pronged crackdown that began in late 2020.

The optimism was also powered by reports that China's top leaders will hold a symposium early next month with a number of internet companies, expected to be chaired by Xi, according to two people familiar with the matter. Food delivery giant Meituan was among those invited, one source said.

The sources declined to be named cited confidentiality constraints.

Authorities are seeking to reassure the corporate executives about the current regulatory environment and encourage them to continue to develop their business, one source told Reuters.

Separately, sources said Chinese and U.S. regulators were discussing operational details of an audit deal that Beijing hopes to sign this year, the latest move to try to keep Chinese companies from being kicked off U.S. exchanges.

"The Chinese regulators have been trying to strike a balance between growth and regulation over the years," said Ming Liao, founding partner of Beijing-based Prospect Avenue Capital, which manages $300 million in assets.

"For now, we might see the regulatory crackdown wrapping up as earlier policies take effect while the economy looks for growth," he said, adding that investors are anxiously awaiting regulatory actions to reassure the investment outlook for China, particularly a clarified set of overseas listing rules.

Earlier on Friday, the Politburo, a top decision-making body of China's ruling Communist Party, vowed to "complete the special rectification of the platform economy", without giving a timeline, and roll out measures to support its development.

Beijing has set a growth target of 5.5% this year, which private economists have said will be difficult to reach without significant support, as COVID-19 lockdowns and other heavy curbs to battle the pandemic create havoc for businesses and supply chains.

During Friday's meeting, the Politburo said it will support COVID-hit industries and small firms, accelerate infrastructure construction, and stabilize transport, logistics, and supply chains, according to the state-run Xinhua news agency.

Gary Ng, senior economist at Natixis in Hong Kong, said the Politburo meeting "is a positive sign that the government seeks to prioritise growth versus a lot of other goals such as deleveraging or other regulatory change in the short term."

Ng said that anti-trust measures that have squeezed the platform economy as well as a clampdown on the property sector could ultimately return.

"But in the short run because of the pressure on growth and the zero covid policy, there will need to be a trade off between deleveraging and crackdowns versus growth, and that’s why the market is a bit more optimistic in the short term," he said.

Markets had been hit hard over the past two weeks by fears that lockdowns would cause severe damage to China's economy and derail a global recovery just as many countries are rebounding from pandemic-led slumps.