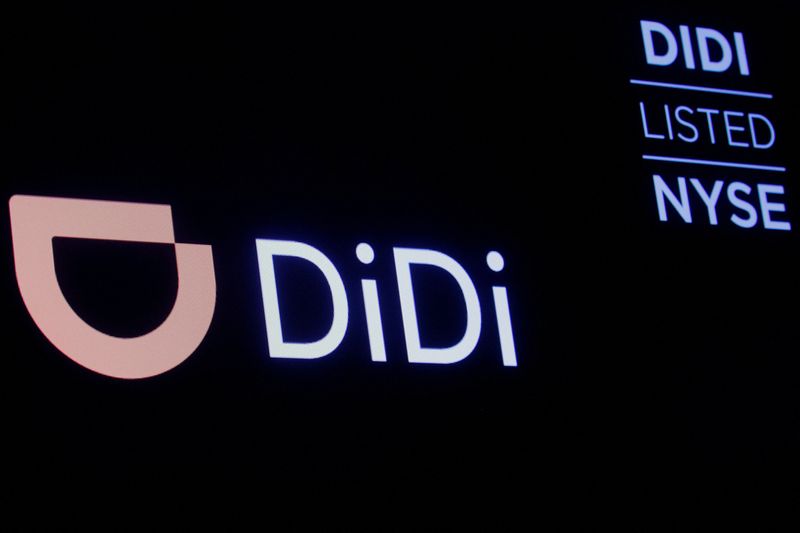 HONG KONG/BEIJING (Reuters) -China's cybersecurity regulator on Thursday fined Didi Global Inc $1.2 billion, concluding a probe that forced the ride-hailing leader to delist from New York within a year of its debut and made foreign investors wary about China's tech sector.

The penalty draws a line under the company's year-old regulatory woes, but there is no clarity as to whether or when its apps will be allowed to return to app stores, or whether or when it can resume new user registrations.

Didi ran afoul of the Cyberspace Administration of China (CAC) when it pressed ahead with its U.S. stock listing even though it was urged to wait while a cybersecurity review of its data practices was conducted, sources previously told Reuters.

The CAC announced its inquiry into Didi shortly after its debut on June 30, 2021. It also ordered app stores to remove 25 apps operated by Didi and asked the firm to stop registering new users, citing national security and public interest.

The regulator in its statement on Thursday did not mention anything about an app relaunch.

Didi previously said it would need to apply for the apps to be restored and three sources told Reuters that the company had updated the apps to ensure they are compliant once a relaunch is allowed.

One of the sources said managers convened meetings with Didi teams after the announcement of the fine, during which they were told that there was still little clarity on when the apps could be restored to app stores.

Didi did not respond to a request for comment on the apps.

In its statement, the CAC said Didi had violated three major laws concerning cybersecurity, data security and personal information protection, a regime that the country revised and expanded last year as part of efforts to regulate its cyberspace and require companies to improve their handling of data.

The regulator also said its investigation found Didi had illegally collected millions of pieces of user information over seven years starting in June 2015 and carried out data processing that seriously affected national security.

It fined Didi 8.026 billion yuan ($1.2 billion) and, in an unusual move, said founder and Chief Executive Cheng Wei and President Jean Liu were responsible for the violations and imposed penalties of 1 million yuan each.

"Didi's violations of laws and regulations are serious ... and should be severely punished," it said.

Didi, backed by investors including U.S. peer Uber Technologies (NYSE:UBER) Inc and Japan's SoftBank Group Corp, in a statement on its Weibo (NASDAQ:WB) account said it accepted the CAC's decision and would conduct self-examination and rectification.

The regulatory action against Didi was part of a wider and unprecedented crackdown on violations of antitrust and data rules, among other issues, targeting some of China's best-known corporate names.

Authorities have in recent months changed their tone towards the crackdown as they seek to boost an economy hurt by COVID-19. The shift has raised hope for companies and investors that the worst is over, though jitters remain.

Chinese technology stocks rose after the Didi announcement, with the Hang Seng Tech Index gaining over 1% in afternoon trade, before paring most of its gains and ending the day up 0.12%.

"The fine should mark the end of Didi's regulatory troubles," said analyst Travis Lundy at Quiddity Advisors who publishes on research platform Smartkarma.

"If there were more, they'd have waited until those were understood and addressed to levy the fine," he said, adding the development should allow Didi to move towards listing in Hong Kong.

Didi, which delisted from New York last month, previously aimed to list in Hong Kong by June. It put such plans on hold indefinitely after failing to win approval from Chinese regulators, Reuters has reported.

Didi's fine would be the largest regulatory penalty imposed on a Chinese technology company since Alibaba (NYSE:BABA) Group Holding Ltd and Meituan were fined $2.75 billion and $527 million respectively last year by the antitrust regulator.

Alibaba's fine equated to about 4% of its 2019 domestic sales, while Meituan's was equivalent to 3% of its 2020 domestic sales. In comparison, Didi's fine would be equal to about 4.6% of the firm's $25.7 billion revenue last year.

Under China's Personal Information Protection Law, companies can be fined up to 5% of their past year's turnover or 50 million yuan, while the maximum fine for individuals seen to be responsible for the violations is 1 million yuan.

A Didi investor, who was not authorised to speak with media and so declined to be identified, said the fines should conclude the CAC's investigation into Didi so the company should be allowed to resume its apps and normal businesses.

The restrictions have hit Didi badly, chipping away at its dominance and allowing rival ride-hailing services operated by automakers Geely and SAIC Motor Corp Ltd to gain market share.

Didi stock soared in the New York initial public offering, giving the company a valuation of $80 billion and marking the biggest U.S. listing by a Chinese firm since 2014. By the time of delisting, the stock had lost over 80% of its value.