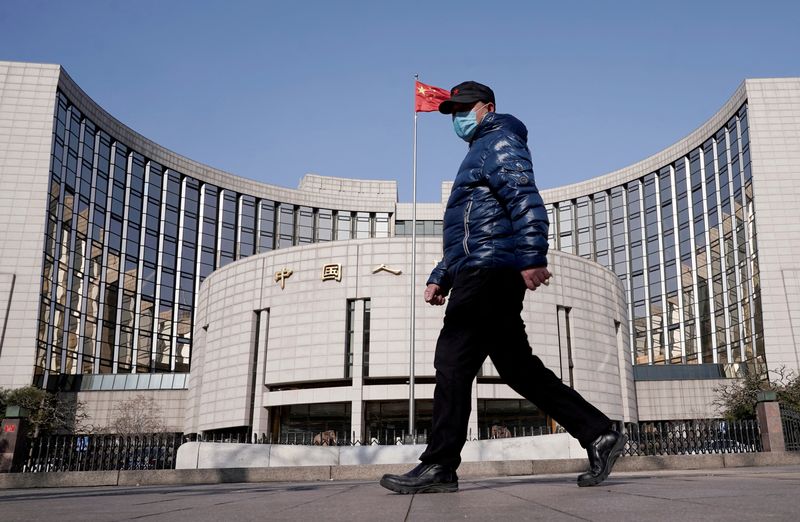 © Reuters. FILE PHOTO: A man wearing a mask walks past the headquarters of the People's Bank of China, the central bank, in Beijing, China, as the country is hit by an outbreak of the new coronavirus, February 3, 2020. REUTERS/Jason Lee

BEIJING (Reuters) - China's central bank said on Friday it launch a 100 billion yuan ($15 billion) relending facility to support the transport, logistics and storage sectors which have been hit hard by COVID-19.

The People's Bank of China (PBOC) will better combine its broad-based and structural policy instruments, and constantly optimise its structural policy system, it said in a statement posted on its Wechat account.

"Monetary policy should coordinate with fiscal and industrial policies to jointly boost the confidence of market players, stimulate market drivers, support the real economy and achieve the goal of stable growth," the central bank said.

The PBOC has increasingly relied on targeted policy tools, including low-cost loans, to support the slowing economy, as it faces limited room to cut interest rates for fear of fuelling capital flight and inflation.

Such structural policy instruments will give financial institutions more incentives to boost lending at lower funding costs to small firms and weak links of the economy, the central bank said.

On Wednesday, the PBOC said it had allocated an additional 100 billion yuan worth of loans dedicated to coal production and storage.