Canada to complain about U.S. auto move in latest sign of trade strains 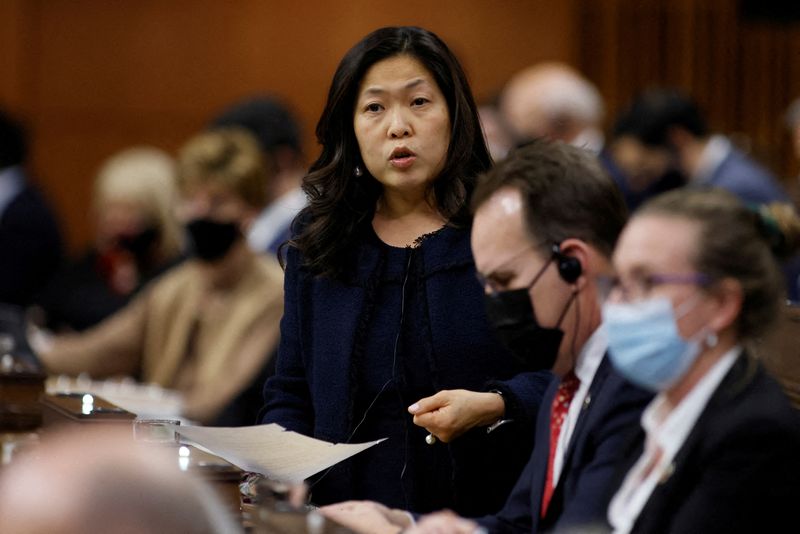 OTTAWA (Reuters) -Canada will sign onto a complaint against the United States over its interpretation of how free trade should apply to the continental auto industry, another sign of souring ties between the two neighbors.

Trade Minister Mary Ng said on Thursday that Canada would join Mexico in asking for a dispute settlement panel under the terms of the U.S.-Mexico-Canada (USMCA) trade pact.

The two countries want to clear up disagreements over how to apply automotive sector content requirements under the treaty, which came into effect in July 2020, replacing the North American Free Trade Agreement (NAFTA).

Mexico and Canada are also unhappy about proposed U.S. tax breaks for American-based manufacturers of electric vehicles. This, they say, could undermine the highly integrated North American auto industry.

The USMCA says 75% of a vehicle's components must originate in the three nations to quality for tax-free status, up from 62.5% under NAFTA.

Mexico and Canada favor a more flexible interpretation of the regulations than Washington, which sought an overhaul of NAFTA when Donald Trump was president in order to protect U.S. manufacturing jobs.

"The interpretation that the United States adopted ... is inconsistent with USMCA and the understanding shared by the parties and stakeholders throughout the negotiations," Ng said in a statement.

Mexican Economy Minister Tatiana Clouthier welcomed Canada's move, tweeting "the regional industry that has been developed for long time has to be defended".

No one was immediately available for comment at the office of the U.S. Trade Representative.

The election of Joe Biden as president did little to improve trade tensions with Ottawa that had simmered under Trump. A USMCA panel last week said Canada's dairy practices violated the accord https://www.reuters.com/world/americas/panel-finds-canadas-practice-reserving-dairy-quotas-inconsistent-with-usmca-2022-01-04 and last month Ottawa launched a challenge https://www.reuters.com/business/canada-challenge-us-softwood-lumber-duties-under-usmca-minister-2021-12-21 against U.S. duties on softwood lumber.

Washington is also unhappy about a proposed Canadian tax on digital services, and reiterated its complaints https://www.reuters.com/business/us-trade-official-raises-concerns-about-canadas-proposed-digital-services-tax-2022-01-12 on Wednesday.