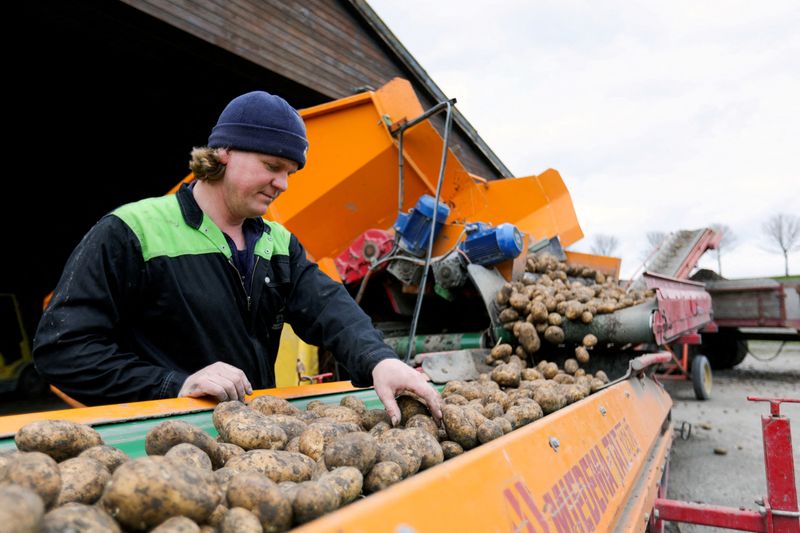 © Reuters. FILE PHOTO: A farmer handles a large stock of potatoes that he can?t sell to restaurants or catering services, as they are closed due the coronavirus disease (COVID-19) outbreak, at his property in Purmer, Netherlands, April 3, 2020. REUTERS/Eva Plevier

(Corrects headline and first and seventh paragraphs to show that exports will only resume eventually; in first paragraph deletes that no fungus found in fresh potatoes. Corrects 4th paragraph to show that no wart found in seed potatoes in fields not regulated by Ottawa, not that no wart found in non-quarantined areas; in 4th and 5th paragraphs, correct to say national survey was of seed potatoes in unregulated fields and not a national survey of fresh potatoes)

OTTAWA (Reuters) - Canada has completed an important step for eventually resuming exports of fresh potatoes to the United States from the province of Prince Edward Island, the Canadian Food Inspection Agency said on Friday.

Canada unilaterally halted the shipments in November from the province after finding the potato wart fungus on two farms in October, the first in 21 years.

The United States had said it would ban all imports of fresh potatoes from the province unless Canada took further action, a measure Ottawa says would be hard to overturn.

One U.S. demand was for Canada to check for wart in fields of seed potatoes. These are exported and then grown to maturity and the risk of contagion would be greater if they had the wart.

The CFIA carried out a national survey which detected no wart in seed potatoes in fields not regulated by Ottawa. This, it said, was information Washington wanted.

"(This) was provided to the U.S. Animal and Plant Health Inspection Service earlier today, and should serve to provide reassurances they need that it is safe to resume the trade of fresh potatoes," the CFIA said in a statement.

"We do not anticipate that it will lead to any immediate change in the current prohibition," it added, saying Washington was seeking other information. This, the CFIA indicated, could take months to provide.

The U.S. Animal and Plant Health Inspection Service did not respond to a request for comment. Friday is a public holiday in the United States.

Potato wart can decrease crop yields but poses no threat to human health or food safety, the CFIA says.

Prince Edward Island grew about 20% of the national harvest in 2020. The crop is worth more than C$1 billion ($781 million)annually to the province's economy.