Campari warns of supply constraints after first half sales rise 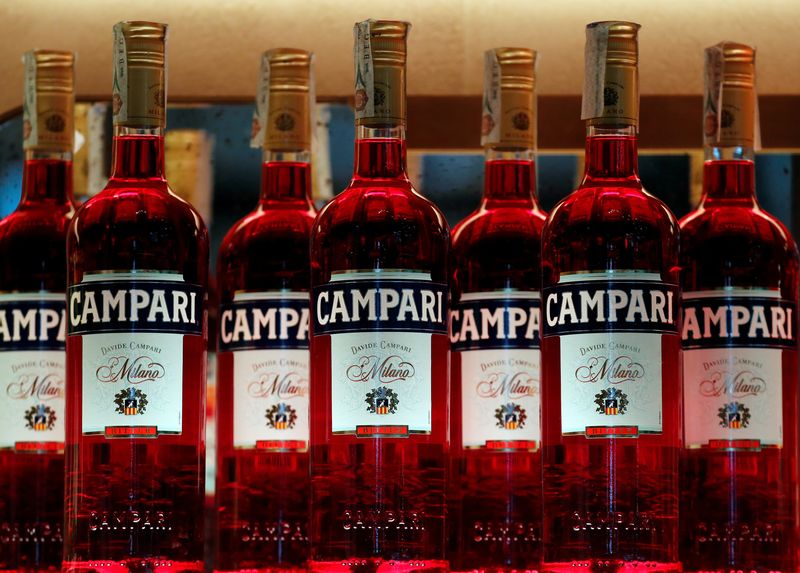 MILAN (Reuters) - Italian drinks group Campari reported a 19% rise in like-for-like sales in the first six months of the year, but warned that temporary supply constraints could affect shipments in the second half.

The maker of Aperol and Campari bitters said in a statement that so called organic revenue rose to 1.26 billion euros ($1.28 billion) in the first six months of the year, slightly ahead of market forecasts of around 1.22 billion euros.

The rise was spurred by a full recovery of sales in restaurants and bars in Europe after the pandemic, good weather and pricing, Campari said.

Sales of Aperol, which is the group's best-selling product and the key ingredient for the Spritz cocktail, rose 37%.

Adjusted operating profit in the January-to-June period rose 28% on an organic basis, which excludes the effects of acquisitions, to 310.9 million euros, with margins widening to 24.7% from 22.3% a year earlier.

However, Chief Executive Bob Kunze-Concewitz said that input and logistics costs have been increasing throughout the year.

"We are doing what we can to compensate," he told analysts during a call.

Campari said that in the second half it expects to keep benefiting from a positive exchange rate effect and aimed to weather inflationary pressures via planned price increases and operational efficiencies.

Demand growth for aperitifs is so strong at the moment that the company was looking to develop existing relationships with third party bottling companies in order to try to satisfy it, Kunze-Concewitz added while speaking to Reuters.

Commenting on the company's decision to confirm full-year guidance of a flat organic operating profit margin in 2022, he told analysts that this was a "pretty good result given the context".

Shares slipped into negative territory after the results. By around 1515 GMT, the stock was down 0.4%, underperforming a 1.5% rise in Milan's blue-chip index.

"Lack of organic margin guidance upgrade may disappoint the bulls" but "the company is right to err on the side of caution here," said Jefferies in a note.